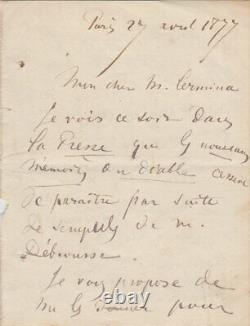 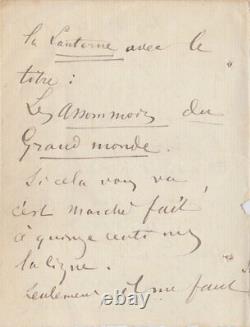 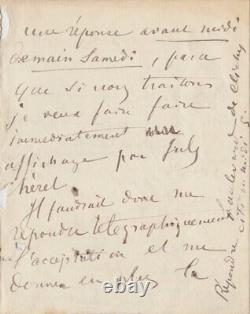 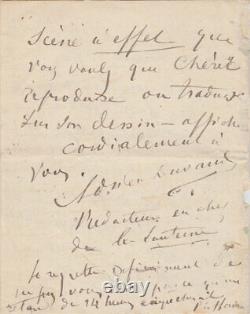 Signed autograph letter to jules lermina. Autograph letter signed, bet, 27 April 1877, to jules lerma. Very interesting letter relating to his novel-feuilleton the new memories of the devil, which became the assommoirs of the great world. This novel was to be published in the press but its director, Jean-Hubert debousse, took scruples in front of the boldness of the opening decides to censor the opening. The news was announced in the press of 28 April 1877: "Our readers were rightly surprised not to find in the columns of the press the continuation of the prologue of new memories of the devil.

We owe them an explanation of this fact. The following correspondence was exchanged between the director of the press and the author: dear sir, you know that for some time I had been absent from betting, I had not personally become acquainted with the new memories of the devil. I must tell you that when I read the first series, I was seized of scruples that forced me to suspend, by telegraph, the publication of your novel and to demand communication of the manuscript. I just finished reading it. The devil's new memories are, I do not hesitate to affirm, an original work, interesting in all points of view and which reveals a talent of first order. But this work contains boldness of situation and style which seems to me incompatible with the appearances and general spirit of the press.

I therefore find myself forced to demand from you many cuts and profound changes, not from the point of view of the general data whose morality is indisputable, but from the audacity of a form that is too realistic. I want too much of your cooperation not to hope that we can easily reach an agreement. To this letter, Jules lermina replied: my dear director, it is not for me to fight your scruples. The devil's new memories are a true painting of vicious society.

I have tried, I confess, the counterpart of a famous work, wanting to paint what I will call the assommoirs of the great world. You will understand that the form and substance are related to this point that one cannot be changed without the other being compromised.

The cuts and changes that you indicate to me would amount to a true mutilation, and the writer must say of his works: sint ut sunt aut non sint. As a result of these talks, a new agreement was reached between the press director and the author. Jules lermina has removed the manuscript from the devil's new memoirs, but his collaboration remains with the press, and we have secured the publication of a new work whose title, as soon as next week, we will make known to our readers. On May 6th, the publication of the new memoirs, which became the assumptions of the great world, was announced in the lantern.

The novel appeared in the newspaper on May 27, 1877. I see tonight in the press that the new memories of the devil cease to appear because of scruples of m. I propose to give them to me for the lantern with the title.

The assumptions of the great world. If that's okay with you, it's done at fifteen cents the line.

Only, I need an answer by noon tomorrow Saturday, because if we treat I want to make immediately display by cheret jules. So I would have to respond telegraphically on acceptance and give me the scene in effect that you want cheret reproduced or translated on his drawing - poster. Regrettably to you, adrien duvand editor-in-chief of the lantern.

I very much regret not seeing you because a 24-hour delay would prevent the case. Margin: answer boulevard de clichy / City of midday 5.

Third Republic at peace (france). Two tears in the central fold, without any shortage. Adrien-jean-laurent duvand is a French politician, publicist and lecturer. Jules lermana is a French novelist and journalist.

More information about jules lermina. This is an authentic letter. Our letters are accompanied by a descriptive sheet including a transcript. The invoices and cards we issue are instead of a guarantee certificate.

France free shipping private carrier on request. Shiltonson letters autographs & historical documents. This item is in the category "collections\letters, old papers\autographs\historical persons". The seller is "shiltonson-paris" and is located in this country: fr.