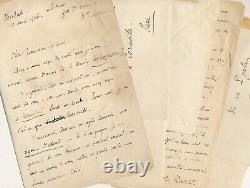 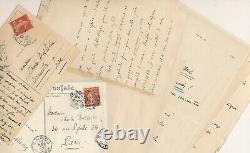 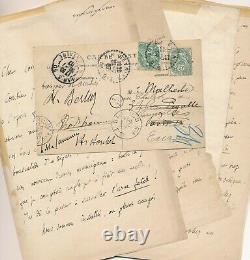 Rich correspondence of 32 signed autograph letters addressed to the musicologist and librarian of lapera de paris, charles malherbe. Most of the letters are in-8 format with the faces of the envelopes retained, including 7 postcards, or some 45 pages. Some are marked at the edges by traces of moisture that have altered the paper but without loss of text. Adolphe boschot regularly gives Lavancée news of his work on berlioz. He copied manuscripts that he had entrusted to him, proposed to make a pilgrimage to the house of Berlioz, asked to have him carry documents, kept him informed of the information he collected here or there and of his search leads, gave news of his military instruction.

Returning from Milan: "I had completely forgotten our fiery contradictor." His perrin editor is delighted with his first volume, curzon has heard of a "very remarkable" work. "Berlioz ii is finished yesterday. But I intend to do it again! Twenty times on the profession, it was said in the last century where artistic consideration was being given". He is interested in françois de sales, "un prodigious prosateur" passed in silence by the academics, "here is an admirable subject of biography, which is looking for me, after my romantic". "I recommend you the extraordinary faust of lasorbonne lichtenberger.

"I just found the introuvable handzer brochure (90 pages on berlioz)". He proposes to give him a fragment of his study on berlioz and langleterre. About the receipts signed by berlioz "for costs of copying the consignments", all these accounting documents (from the villa medicis to rome) are of convenience".

He mentions a letter that is not Berlioz's but his brother's prosper. He cites the society mozart to which weed charles did not want to join and sends him a letter on the trace of a manuscript of mozart. "I still wonder if mozart is not, in fact, our greatest French artist? He announces that he marries the daughter of leopold dolphin, "an excellent musician". Being part of the correspondence, a postcard with the signatures of the lionel musicologists of laurencia, jacques-gabriel prod man, dadolphe boschot and with humorcelledeberlioz!

The item "adolphe boschot rich correspondence of 32 autograph letters signed berlioz" has been on sale since Wednesday 31 March 2021. It is in the category "collections\letters, old papers\letters".