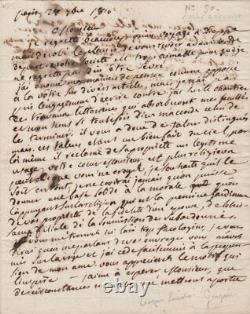 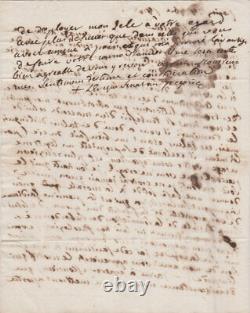 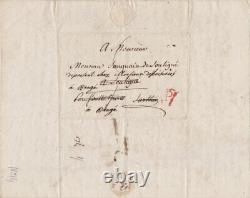 Important letter from the abbot gregoire addressed to the conventional martial Sauquaire-souligné. In this letter, the bishop tries, with ardour, to bring Sauquaire-Suligné closer to the "right path" and commits him to follow the path of religion: "I have stated my way of thinking as opposed to yours in various articles, but I have not made a commitment to write against it.

] Your court sir may be more religious than you believe, I wish he would be in all [.] You will find me far too theologian here, I will tell you that by telling me about your works you have set me on the path and I easily yielded to the propensity of my soul.] hostile to the empire, martial Sauquaire-Suligné was noticed in 1818 by the publication of pamphlets against the oppression of the people.

In one of them, he calls the trial a babeuf gracchus - the brain of the conjuration of equals - a "long judicial farce". In 1820 he was charged with seditious manoeuvring in the sarth. He was then in contact with Portuguese and Spanish revolutionaries but also with constant benjamin and lafayette. At the end of the restoration, he took refuge in angleterre and did not return in france until after the revolution in July. I'm very sorry that a trip to dieppe took me away from the pleasure of seeing you again before you left.

Your company is too kind for me to regret being weaned from it. I have stated my way of thinking as opposed to yours in various articles, but I have not made a commitment to write against it. I have on the construction site literary works that will absorb my faculties and my tems if, however, God grants me the one to finish them. He has endowed you with distinguished values but these values being a good made from heaven, by this very way he demands of property a legitimate use; your court gentleman is more religious perhaps than you believe, I hope that he is in all; I will never believe that one can give a solid foundation to morals [rature] only by relying on the religion which is the first guardian of your properties, of the fidelity of a wife, of the filial obedience of the submission of subordinates. You will find me far too theologian here, I will tell you that by telling me about your works you have set me on the path and I easily yielded to the propensity of my soul. You will appreciate the motive that inspires it - I like to hope, sir, that new circumstances will put me within reach to deploy my zeal towards you with more success than in the one that led you to bets and that gave me the advantage of getting to know you. It will certainly be nice for me to see you there again. Accept, sir, my feelings of esteem and consideration. + the eveque senator gregoire. Sauquaire to stress at Monsieur desboiseries. Weakness in the upper part without affecting the text. Abbé henri jean-baptist Gregoire is a Catholic priest, constitutional bishop and French politician, one of the main figures of the French revolution.

Martial Sauquaire-Suligné is a French hydraulic engineer and publicist. More information about henri gregoire. This is an authentic letter.