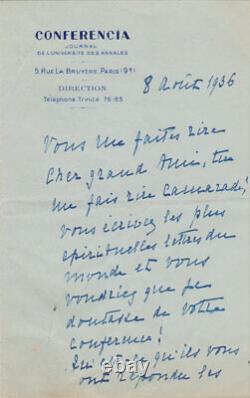 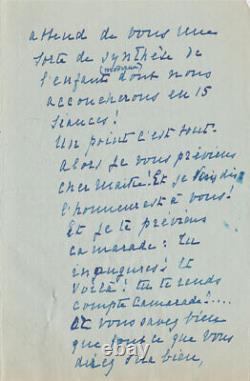 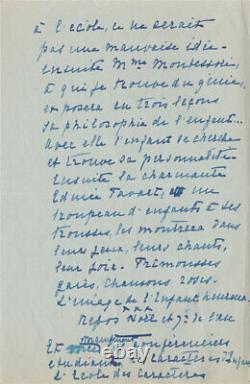 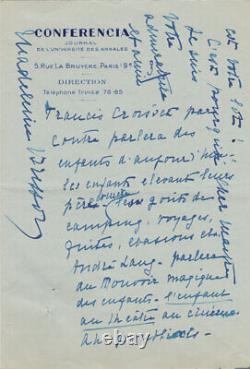 Very nice letter on the organization of conferences on the theme of the child which aims to "to make known and love the child. A child born in the midst of revolution and in a changing country. She warns her friend that he will have the honour of inaugurating this series of lectures and informs him about the program of the other eminent lecturers: the pedagogue maria montessori will expose his philosophy of the child; georges lecomte, the childhood of lamartine; louis gillet, the vocations of children; abel hermant, his childhood during the siege of Paris of 1870; the psychiatrist specializing in the childhood of Gilbert robin, health and morals being one; francis de crosset, the children of today; andré lang, the child in theatre and cinema; ève curie, his childhood in the shadow of his parents: stone and curie; antoine de levvis-mirepoix, the modern family. Another letter is attached: signed autograph letter, bets, [1936], 1 page on paper with header of the newspaper conferencia, to maurice boy. She informs him that he will replace camus, the latter "not coming".

You make me laugh dear friend, you make me laugh comrade! You write the most spiritual letters in the world and you would like me to doubt your conference! What did they answer you the woods of your pleasure, what did she sing to you m. That you are a hot speaker of talent and that comrade (rue) labruyère is doing very well to bother you to force you to think of our terrible children!

and first dear master I never get involved in knowing what the speaker will say, but this time, sir, you i-nau-gu-rez! Inaugurating, you are expected a kind of synthesis of the (modern) child we will deliver in 15 sessions! Then I warn you dear master!

And I tell you, the honor is yours! And I warn you comrade: you inaugurate!On this chapter there is much to say. The parents at the edge, that wouldn't be a bad idea.

Montessori, to whom I find genius, will expose in three lessons his philosophy of the child... With her the child seeks and finds his personality. Then the charming edmie favart, [rature] a flock of children after her, will ride them in their games, their songs, their joy. The image of the happy child. And then paul chasle shows the sea without e: school of energy.

And you see the picture from here. The mousses in the ohe sails!

- the children and the boats the children and the dives hou! And then it's abel herman who will give his confidences of a child from the seat... He excels in these retrospectives. And talk about the education of the past. When a child leaving for Oxford was hailed as a phenomenon.

On the side: I forget the 5th gilbert robin: health and morals are one. Francis crosset, on the other hand, will talk about today's children.

Children raising their father and mother. The tastes of camping, trips, guides, escapes etc. Andre lang, will speak to the magical power of children - the child in theatre at the cinema. Eve curie will give her child's confidences in the shade of 2 scientists: m.

Curie - beautiful lesson of energy too. Finally levis-mirepoix will conclude by talking about the modern family that is reconstructed in new rhythms. But who remains and will always remain the bottom, and the best of france.

The purpose of the series: to make known and. Who can't fail to be. But who must still know 2 or 3 old virtues like the world and who will remain eternal. Yours, sir, the ones you defend, and of which your conscience, I do not make you say, cannot escape even in the woods of the isère, even when nature calls you.

In short, the work - the consistency of respect for natural and other laws - well comrade, respect for the laws; it's not bad...... on this tear these insanities dear friend, and say what you think, as you think - what will happen to you through the head, through the court, through the mind. And it's going to be an opening chef. And hello to your woods, to your nature. Work well and do not lose your consciousness!! The dazzling talent is your lot! That's why dear master I'm your admirer and friend madeleine breakson.

English and Russian translations available on request. Shiltonson is a member of the national union of the ancient and modern bookstore / international league of the ancient bookstore. Madeleine-yvonne sarcey is a woman of letters and French philanthropist, founder of the university of annals and mother of stone breakage. Maurice boy is a lawyer, essayist, parolier, novelist, polygraph and French historian. He is best known for having defended a large number of causes, both literary and criminal, including those of hardy renee, georges arnaud, jean genet and jean-jacques pauvert.

More information about yvonne sarcey. More informations about maurice boy. This is an authentic letter. Our letters are accompanied by a descriptive sheet including a transcript.

The invoices and cards we issue are instead of a guarantee certificate. France free shipping private carrier on request. Shiltonson Rare Books & Manuscripts. This item is in the category "collections\letters, old papers\autographs\historical persons". The seller is "shiltonson-paris" and is located in this country: fr.