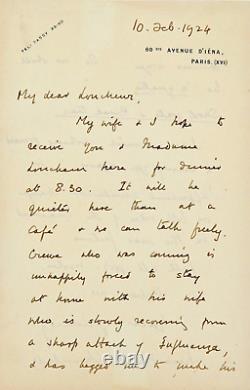 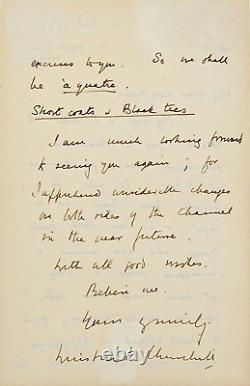 For many years, the autograph library has specialized in the sale of autograph letters and manuscripts. Autograph letter signed to the French minister and MP louis loucheur. Two pages in-8° in English. On both sides of the sleeve in the near future. A nice letter from churchill - then without a warrant - inviting you to an informal dinner (it still indicates the dress code " short coats black tiées ") but whose diplomatic and political discussions as suggested by the future prime minister are guessed.

"My dear douche-maker, my wife and I hope to receive you and Mrs. Douche-maker here for dinner at 8:30 p. It'll be quieter here than at coffee and we can talk freely. Crewe who was to come is unfortunately forced to stay home with his wife who is slowly recovering from a severe flu attack, and begged us to apologize.

So we'll be four. Short jackets and black ties. I look forward to seeing you again, as I anticipate significant changes on both sides of the sleeve in the near future. With all my good wishes. "my dear loucheur, my wife & i hope to receive you & ma'am loucheur here for dinner at 8.30. It will be quiet here than at coffee & we can talk freely.

Crewe who was coming is unhappily forced to stay at home with his wife who is slowly recovering from a harp attachment of influenza, & has beengged us to make his apology to you. So we shall be four. Short beds & black beds.

The collapse of the Liberal party and the government of lloyd george removed winston churchill from parliament from 1922 to 1924. Re-elected as a Conservative MP in October 1924, he became chancellor of the stanley baldwin government in November 1924. He was the chief economic adviser to the betting conference in January 1919 for the negotiation of the Treaty of Versailles, and was directly involved in the discussions with david lloyd george.

He subsequently held several ministerial positions, in parallel with his career as a northern MP: minister of liberated regions (16 January 1921 to 15 January 1922), minister of trade, industry, postal services and telegraphs in the spring of 1924, minister of finance (28 November 1925 to 9 March 1926), new minister of trade and industry 19 July to 23 July 1926, minister of labour and social security 1 June 1928 to February 1930, and minister of the national economy (13 December 1930 to 27 January 1931). Very involved in the issues of post-war social housing and conflict resolution in the world of work, he was also an art lover and collector (near thadée natanson, co-founder of the white magazine) and very committed at European level in the line of aristide briand (he is one of the most active promoters of the ideas and projects of European economic construction of the 1920s). He had married the young lady margaret primrose in 1899. Consult our manuscripts The Autograph Gallery of Centuries specializes in the sale and expertise of autograph letters and manuscripts of the great personalities of past centuries. Purchase / payment methods we accept the following methods of payment: transfers and bank cheques.

The prices shown are in euros and are net. We can also ship by private carrier at your request. Conditions of sale in accordance with the practice of the international league of the ancient bookstore, we accept a guarantee of return within 14 days. The return costs are borne by the buyer. About all the pieces proposed are originals whose authenticity we guarantee.

Our invoices serve as proof of authenticity of the parts sold. However, at your request, we may establish a certificate of authenticity, in addition. This item is in the category "books, bd, magazines\old books, collection". The seller is "juniennn0" and is located in this country: en.