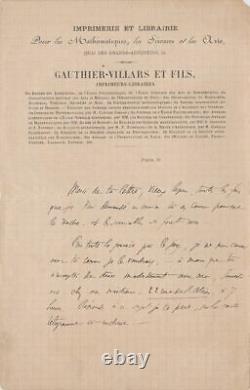 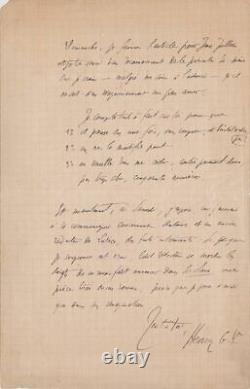 Autograph letter signed, bets, [1889], on letterhead of the Gauthier-villars bookshop and yarns. He thanked his correspondent for having done him a service - "servables are rare" - and he would like to chat with him and invite him to dinner at his mistress, 22 rue de l'odéon. Finally, he will finish an article shortly and would like him to present it for him by respecting a few points. Lutece is the newspaper in which willy held the theatrical section.

It is possible to date this letter with its header. It was not until 1888 that Father Gauthier-villars associated his two sons. Willy left the reindeer to his brothers in 1893. In addition, he mentions Jean Jullien, editor-in-chief of art and critic, which makes it possible to date the letter of 1889, at which time Henry held the musical criticism.

The address of his mistress corresponds to the address of servat. It was there that their Jacques son Henry Gauthier-villars was born that same year (in September 1889). At that time, she was not yet divorced from her husband emile cohl.

It was by placing jacques as a châtillon-sur-loing nurse that willy met colette. He married her four years later, in 1893. Thank you for your letter, old rabbit, every time I asked you for a favor you ran to give it to me, and the helpful ones are rare.

All day long by the jury, I can't talk to you as I would like... Unless you accept a modest dinner with me, Saturday night at my mistress's, 22 rue de l'odéon, at 7 a. Answer this question, please, on the telegram card here-included. Sunday, I will finish the article for jean jullien and I will be grateful to you to present it yourself because I fear - despite my care to soften it - that it is a bit of a bitter wagnerianism. I'm totally counting on you to get him through one step at a time, without a cut, and soon, isn't it? 2° it does not change 3° they will give me, against payment soft, not too expensive, fifty numbers. And now, on Saturday, I hope, because I'll have to let you know about antoine and a former editor of lutece, interesting facts. If what I suspect is true, the writer will bite his fingers for having me announce in the evening a play from his novel, a piece that I think exists only in his imagination. Everything to you henry g. Third Republic at peace (france).

Henry Gauthier-villars, dit willy, is a French journalist, music critic and novelist. This is an authentic letter. This letter shall be accompanied by a descriptive sheet including a transcript. The invoices and cards we issue are instead of a guarantee certificate. France free shipping private carrier on request.

Shiltonson letters autographs & historical documents. This item is in the category "collections\letters, old papers\autographs\historical persons". The seller is "shiltonson-paris" and is located in this country: fr. This item can be shipped to the following country: whole world.