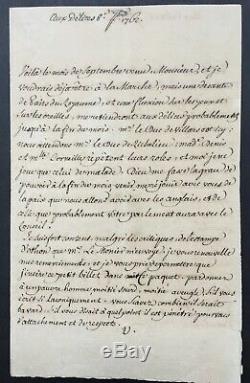 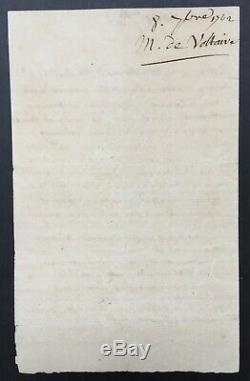 Voltaire nice letter signed letter signed in September 1762. Letter to Marquis Fyot walking, Speaker of Parliament of Burgundy, one of his old friends to have studied with him at Louis-le-grand college. Beautiful signed letter on privacy and in reference to the seven-year war that sachève. Letter contained, in particular in the old book \Foisset, paris, levavasseur edition, pages 282 and 283.

A peer down the kingdom, and an inflammation of the eyes and the ears, hold me to the delights probably until the end of the month. Mr Duke of Villars [Governor General of the country and deProvence counties] is icy; we expect the Duc de Richelieu [marshal and peer of France]; Madame Denis [marie louise mignot, niece and companion of Voltaire] and miss Crow [adopted daughter of Voltaire] repeat their roles, and I only play one of ill. God do the grace of power at the end of the month to rejoice with you for peace that we will have with the English [Voltaire refers here to the peace of the Seven Years' War, 1756 to 1763, between European powers on European and American territory], and one that probably your parliament will have with the board. Forgive a poor man, half deaf, half-blind, sil wrote if tersely.

You know how it would be talkative, sil told you how it is entered for you dattachement and respect. Very good condition, shipment by Chronopost. The item \The seller is \This article can be shipped worldwide.
charlessignedandréletterspaulparismarcelrarelouisjuleshugomailpainterdocumentgeorgeeugeneemilesignaturegustavehenriwithautographsnapoleonbeautifullettervictordrawingautograph signedautographhowalexanderfrancejeanszolasign