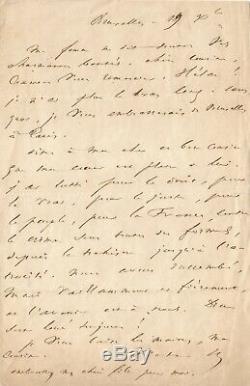 The bookstore autograph centuries has specialized for many years in the sale of autograph letters and manuscripts. Autograph letter signed to his dear cousin. \Poignant and precious letter of the great man, drawn from Brussels.

17 days after the coup of Napoleon III détat of 2 December 1851 and. A week after his arrival in the Belgian capital, the first stage of his long exile. My wife tells me all your kindness charming, dear cousin, how to thank you.

I dont have a long arm, otherwise I would kiss you brussels to paris. Tell my dear cousin and good that my heart is full of it. Jai fought for the right to the truth, for the righteous, for the people, for France, against crime in all its forms, from the betrayal until latrocité. We succumbed, but bravely and proudly, the future is ours. I kiss you hands, my cousin.

Kiss My dear daughter to me. Immediately after the coup détat of 2 December 1851, the poet is wanted for his opposition to the emperor and for trying, unsuccessfully, to organize the resistance lifting the Parisian masses (25000 reward francs were promised that the capture).

December 11 hugo equipped of a false passport, leaving Paris to Brussels by train for 20 hours, under the name of Jacques-firmin Lanvin. The same day that our letter, Dec. 19, hugo wrote paul meurice \Lexil would not lexil.

This little piece of free land will be First of Anglo-Norman island of Jersey, then that of Guernsey, where he sinstalle since 1855. Lexil Hugolian sétirera nearly 20 years. At the capitulation of Napoleon III, the poet returned to France, September 5, 1870, and made his unforgettable words: \Let's shake all around the republic in the face of invasion, and be brothers. This is the fraternity quon save freedom. Check our gallery autograph manuscripts of centuries specializes in the sale and the expertise of autograph letters and manuscripts of the great personalities of the past centuries.

Buy / payment methods we accept the following payment methods: bank transfers and checks. All prices are in Euros and are net. Shipping All shipments are made by registered mail with insurance at fixed price of 10 for France and 20 for the rest of the world. We can also carry out shipments by private carrier to your request. Conditions of Sale that complies with the International League of Antiquarian Booksellers, we accept a guarantee of return within 14 days.

The return costs are borne by the buyer. About ViaMichelin proposed pieces are originals which we guarantee authenticity. Our invoices as proof of authenticity hold parts sold.