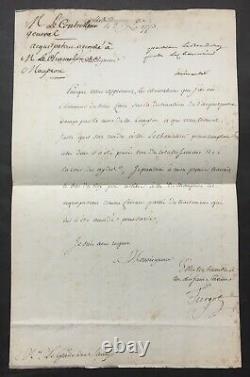 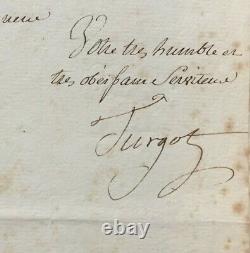 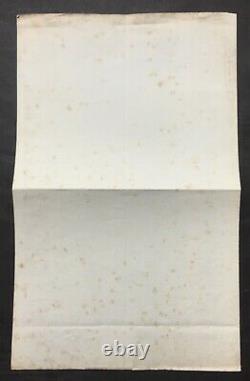 Turgot - signed letter - maupeou minister after dismissal by louis xvi - 1775. As a leader in liberal theories, he was appointed Secretary of State for the Navy, and then Comptroller General of Finance of King Louis xvi. Its measures, aimed at preventing bankruptcy and making savings, help to reduce the deficit, but its character creates strong enmity in the court. He lost the king's support and resigned in May 1776. Letter concerning the situation of maupeou after his dismissal by louis xvi in August 1774 and the granting of a pension to the Grand Minister, by the restoration of the aid court. Since you approve of the observations that I had the honour to make to you concerning the destination of [the pension] vacant by the death of Mr. Langlois, and that you just find that it is returned to m. The chancellor to replace the one that he was deprived of when the court of the aydes was restored, I will take to my first job the gift of the king to return to m. De maupeou this [pension] as part of the treatment that was granted to him for his life. " Chancellor, keepers of seals from 1768 to 1774 and chief minister of state under the reign of louis xv and at the beginning of that of louis xvi, he was famous for his reform of justice and parliaments in 1771.

Aid prices were sovereign courts of appeal to deal with tax disputes. The court of betting aid took an active part in all the movements of contestation of absolutism, during the sling, and especially from 1756, under the presidency of weeds. It was abolished in 1771, restored in 1774 and finally abolished in 1791.

A few foxes, if not good condition. This item is in the category "collections\letters, old papers\autographs\historical persons".

The seller is "*epistole*" and is located in this country: fr.