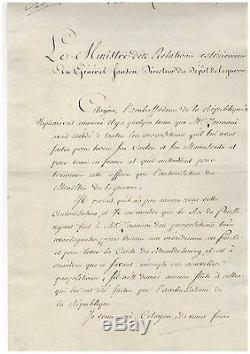 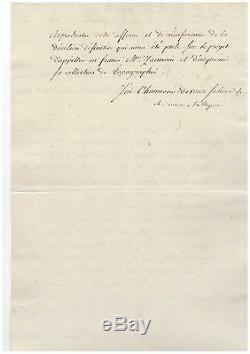 \Zannoni had acceded to all the proposals he had made to him to deliver his maps and manuscripts and to come to France, and he was waiting to complete this affair as the authorization of the Minister of War. It appears that he has not yet received this authorization, and he tells me that the King of Prussia having done so, has not received this authorization. Zannoni offers very advantageous proposals for drawing a meridian in Prussia and for raising the map of Brandenburg, it is to be feared that this scientist will not accept these new propositions; if nothing is done to those made to him by the ambassador of the republic. I beg you, citizen, to make you represent this case and to inform of its final decision which will have been taken on the project to call in France m. Zannoni and acquire his topography collection.

His most famous work was l. Geographical Atlas of the Kingdom of Naples. Quil will complete in 1812. The item \Napoleon 1st, 2nd empire.

The seller is \This item can be delivered anywhere in the world.