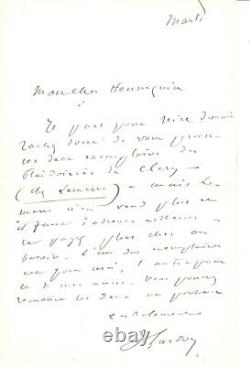 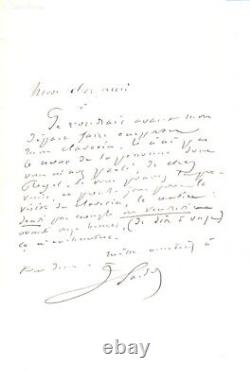 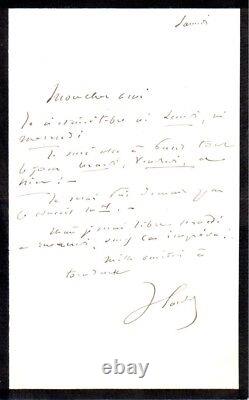 (circa 1890) 1 page, 166 x 105. Autograph letter signed by Victorian Sardinian of a page without date, with only the mention Tuesday in the upper right corner. Sardou commissioned hennequin to "procure two copies of the cléry pleadings (at lemerre)" the copies of the book being unobtainable he advised him to "address elsewhere and pay more if necessary". If these plaideries, of which lemerre published a collection in 1890, interest at this point sardou is that one finds there the one who opposed him to a certain mario uchard in the case known as fiammina versus odette. Sardou was accused of plagiarism by uchard.

The accuser was dismissed, the court ruling that the publication of odette twenty years after the publication of the fiammina could not harm uchard although the subject was very close. Sardou then evokes his departure for nice where he owned a foot on land: the famous "villa graziella". The same - a second signed autograph letter, 155 x 98, undated. It's about making an appointment with a professional about his harpsichord "I would like to have my harpsichord taken away before my departure". The same - two short missives on a card (66 x 115) and on bereavement paper (155 x 97) concerning appointments made or missed.

This item is in the category "collections\letters, old papers\autographs\historical persons". The seller is "roman102003" and is located in this country: fr.