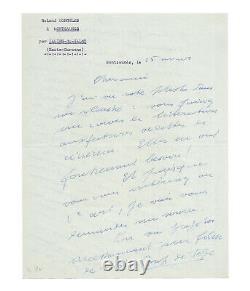 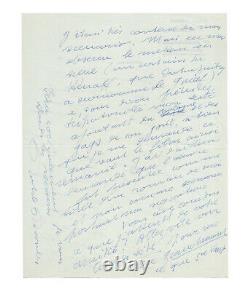 Autograph letter signed " roland dorgeles" to Albert dubeux montsaunes, s. D on 15 April [1944], 2 p. In-4 traces of folds due to the original shipment. Nice letter from dorgeles about his movie hit the head. I saw your picture in an illustrated picture: you were doing a literature lecture to future movie stars.

And since you're interested in art, I'm going to ask you for a favor. We're going to project a movie of my head. I was very happy with my script.

But in my absence the director (a certain [reborn] the henaff, whom sacha guitary nicknamed the gniaf), has, under various pretexts, tripatouilled my text adding in. Dialogue and the gags of his taste, so I wonder what the film is worth.

I also asked that the work be presented as a novel of me and not as a script bearing my signature. Do you understand what I expect from your friendship? Quickly go to the head to tell me frankly what it's worth. I'll shake your hands. Is a reborn henaff movie released in 1944.

It was roland dorgeles who wrote the script. He will stand out with his film Colonel Chabert in 1943, according to the novel of honoré de balzac. This item is in the category "collections\letters, old papers\autographs\others".

The seller is "laurent-autographs" and is located in this country: fr.