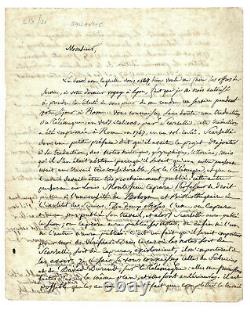 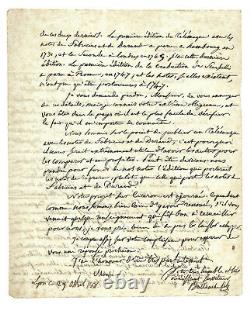 Autograph letter signed "ballanche fils" to a Monsieur Lyon, on April 29, 1811, 2 pages in-4 infiltrated small holes due to corrosion of the ink on two words with infamous tears. Beautiful ballanche letter relating to the translation of telemaque adventures into Italian.

The kindness with which you kindly offered me a service, on your last trip to Lyon, makes me think I am allowed to take the freedom to ask you to do me a service during your stay in Rome. You probably know a translation of the telemaque into Italian verses by scarcelli. This translation was printed in Roma in 1747, in one theft. Scarselli in a small preface says that he had the plan to add to the translation, historical, geographical, literary notes, but that he was abstaining because he knew that another person had a very considerable work on the telemaque, and that this work was to be published very soon.

This other person is louis montefani caproro public law professor at the University of Bologne and librarian of the Institute of Science. Of two things one, or caprro will not have published his work, and then scarselli will have published his, or caproro will have published his notes. It's a fact that it would be important for me to check. In case the notes are scarselli, night of caproro, exist, it would matter to me to have them. I don't know if you know those of fabricius and daniel durand, on the telemaque: they seem to me to be made from the same plan, and they are earlier. It is possible that the others have only completed this work of the latter two. The first edition of the telemaque with the notes of fabricius and durand appeared in Hamburg in 1731, and the second in London in 1745. I have this last edition. The first edition of the scarcelli translation appeared in Roma in 1747, and the notes, if any, could only be after 1747.

I beg your pardon, sir, for bothering you with these details, but I know your extreme compulsion, and you are in the country where it is easier to verify the fact that it is important to know. We are about to publish a telemaque with the notes of fabricius and durand, which is why it would be extremely useful to have others to compare them and enjoy them. Perhaps we should take as a background our notes the edition that would carry the notes of caproro, rather than the one that bears the notes of fabricius and durand. Our cider project is adjourned.

However, as we are far from having given up, if you have some information that is good for us, please do not let them escape. I count on your complacency enough to hope for a forthcoming answer.

I have the honour of being perfectly your very humble and obedient servant. Ballanche was in charge with his father of one of the most important lyon printing works.

It was not until 1816, when his father died, that he sold the family business and settled in Paris to devote himself to letters. Epistolier, ballanche exchanged many letters with chateaubriand, mme recamier, saint-beuve, among others. This item is in the category "collections\letters, old papers\autographs\others".