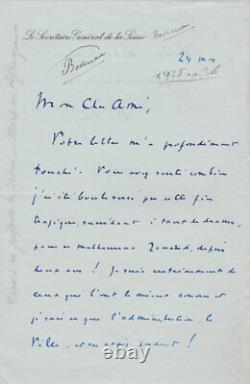 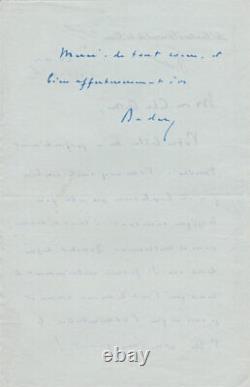 Signed autograph letter to armand schiller. Autograph letter signed, bets, [1935], on letterhead of the secretary-general of the seine, to armand schiller. Moving letter following the tragic death of Edward fox, prefect of the seine and then governor of the French equatorial-africa. In March 1935, during an inspection tour, the air disaster of bolobo (Democratic Republic of the Congo) caused the death of the Fox Governor, his wife and five companions. Many echoes to his memory were published the following days the disaster: "...

Becoming governor of the French equatorial-africa, he had brought the same eagerness to fulfill all his duty. It was during an inspection tour that death cruelly seized him.

For this representative of the france felt that the france must often be visible to the colonists and the natives, in the person of representative. Despite the fatigues and risks, he went to visit the populations of the various parts of the colony and attested to the vigilance of the mother-patria.

He was not content to study the problems in his office; he intended to check the complex data on the spot. To judge well, he wanted to understand well..."In the year of the accident, a Fox Edward Square was born in the xie district of betting, due to the proximity of the Museum of Colonies. In the press: the weather, March 21, 1935.

You have felt how upset I have been by this tragic end, following so many tragedies, for this unfortunate fox, for the last two years! I am certainly among those who have known him best and I know what the administration, the city, and his friends are losing! Thank you, from every court, and very affectionately to you bodereau. English and Russian translations available on request. Pierre bodereau is a French lawyer and politician.

Armand schiller is a French journalist. This is an authentic letter.