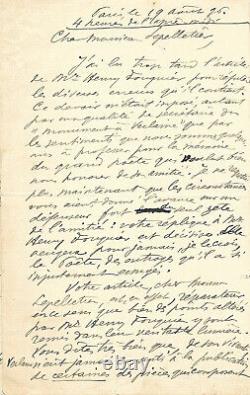 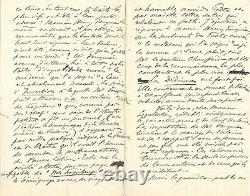 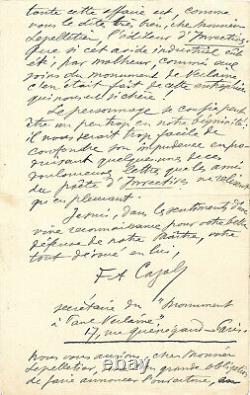 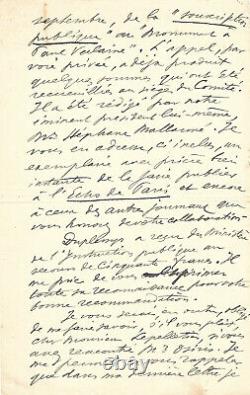 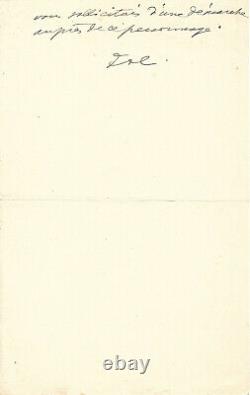 For many years, the autograph library has specialized in the sale of autograph letters and manuscripts. Autograph letter signed to edmond lepelletier, friend of always verlaine. "these painful letters which the friends of the poet of invectives reread only by weeping.

" Important plea of cazals to lepelletier (then editor-in-chief of the betting echo) to defend the memory of paul verlaine (died seven months earlier), following the murderous critique of henri féquier published in the figaro of August 12, 1896. Cazals also struggled with the erection of the verlain monument and evoked stéphane mallarmé, chairman of the committee. "Dear Monsieur Lepelletier, I read too late the article of mr Henry enquire to refute the various errors that it contains. This duty was imposed on me, both by my capacity as secretary of the "monument to verlaine" and by the feelings that we are a few to profess for the memory of the great poet who wanted to honor us with his friendship. I no longer regret that the circumstances have given you a lead over a defender of the only zeal of friendship: your reply to mr.

She will avenge for ever, I believe, the poet, the outrages that he has so unjustly wiped out. Your article, dear Monsieur Lepelletier, is indeed repairing, in the sense that many points altered by mr henry ferquier are put back in their true light. You say very well that, in his lifetime, verlaine never consented to the publication of some of the pieces that make up this book. In any case, the most vivid features have been at their right address, Mr.

Henry ferquier himself would he not be obliged to recognize that the ends of which he cares so rigorously to paul verlaine, were, as they say, only a "loaned for a rendering"? Fouquier wrongly accuses our poet of ingratitude towards "the doctor whom he treats her". The play of invectives to which mr ferquier alludes is aimed at a certain "hospital intern" who, committed by his "chief" to the care of the illustrious patient, made a cruel game (and hold the testimony of the very mouth of verlain) to aggravate by a thousand unworthy practices of science and master that he had the honor of supporting the atrocious suffering of the poor levian. This is the truth attested by an ineffaçable page of "my hospitals", by the testimony of twenty more truthful and honourable friends of the poet and by many letters of him that relate these facts. I would add, in response to Mr. Henry foéquier, that the poet's feelings towards "the doctor who treats her" - I name him please, it's the doctor's mr. Chauffard have been those of the most constant and vivid recognition. The signings have been authentic. They contain a verlaine-to-heater sonnet which can leave no doubt on this point. So here, dear Monsieur Lepelletier, truthfully restored the moral character of paul verlaine, the imputations of mr ferquier concerning the marriage of verlaine and his "relations" with his wife and son were ruined by your answer. These slanders will therefore turn to the one confession, to their authors and to those who accredit them. But the great culprit in all this is, as you say very well, dear Monsieur Lepelletier, the editor of invectiv es.

That if this industrial greed would have been, for evil, committed to the care of the monument of verlain, cen was made of this enterprise which is so dear to us! Perhaps the character confides a little too much in our begninity [sic]: it would be too easy for us to confuse his impudence by producing some of those painful letters that the friends of the invective poet only reread by crying. I am in the feeling of a deep gratitude for your beautiful defense of our master, your whole devoted in him, fa cazals, secretary of the "paul verlaine monument", 17 rue guénégaud - bets. We would have you, dear Monsieur Lepelletier, a very great obligation to have announced the opening in September of the "public subscription" to the "paul verlaine monument".

The appeal, privately, has already generated some money that has been collected at the committee's headquarters. It was written by our eminent president himself, Mr. I would like to send you a copy of it, here and here, with a momentous prayer, to have it published in the echo of bets and even to those of the other newspapers that you honour your collaboration. Duplessis received fifty francs from the Ministry of Public Education.

He asks me to express his gratitude for your good recommendation. I would also be obliged to let me know, please, dear Mr Lepelletier, if you have met Mr Osiris.

I would like to remind you that in my last letter I asked you for an approach to this character. Lepelletier had the front page published as early as 26 August.

From the betting echo, an article entitled "The Defense of the Monument". Cazals was at the initiative of the founding of the Verlain Committee in May 1896.

The "paul verlain monument" envisaged by the committee will finally be inaugurated only on May 28, 1911, in the gardens of the luxemburg. He is the work of the august Swiss sculptor of niederhausern, known as rodo (1863.1913). Check out our manuscripts The Autograph Gallery of Centuries specializes in the sale and expertise of autograph letters and manuscripts of the great personalities of past centuries. Purchase / payment methods we accept the following methods of payment: transfers and bank cheques.

The prices shown are in euros and are net. All our shipments are made in registered mail with insurance at a flat rate of 10 for France and 20 for the rest of the world.

We can also ship by private carrier at your request. Conditions of sale in accordance with the practice of the international league of the ancient bookstore, we accept a guarantee of return within 14 days. The return costs are borne by the buyer. About all the pieces proposed are originals whose authenticity we guarantee. Our invoices serve as proof of authenticity of the parts sold. However, at your request, we may issue a certificate of authenticity, in addition. The item "(paul verlaine) f.

Verlaine's death" has been on sale since Tuesday, March 9, 2021. It is in the category "books, bd, magazines\old books, collection".