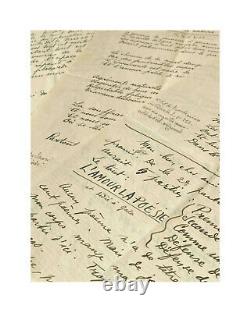 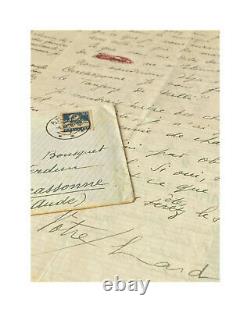 The whole thing: love poetry. No poem was born with a title. But every day, my body eats my head. I can't wait to get out of here. Too much nerve, too many nightmares.

Maybe, since you didn't mutter if you had a gramophone, hate the music. But be sure that what I have advised you to do with this one is nothing but bad relations. What you're telling me about paulhan's cowardice the name was caviared to the red pen, maybe with the musket hand itself so as not to compromise? We'd like to be in carcassonne already. I'll send you the nelli's denguy.

I'd like to write songs and, it's funny, I never had so little desire to sing. Did you end up getting the story of lily? If so, you publicly say what you think. And you're the only one.

[The letter is enriched with 3 autograph poems deluard and annotated xxix, xxxv and xxxvii]. [at the top of the first page]. They don't liven up the light anymore. They no longer play with fire hanged in contempt of the victories and limiting all their fellows shouting in open arms blind to have on the face all eyes like kisses face beaten by tears they captured fear and boredom the lonely for all have seduced silence and made him make grimaces in the desert of their presence.

All tears for no reason. All night in your mirror the life of the floor to the ceiling you doubt the earth and your head outside everything is mortal yet everything is outside you will live from the life of here and the miserable space that responds to your gestures that closes your words on an incomprehensible wall. And who's thinking about your face? On knees youth on knees anger. Linsult bleeds threats ruins the whims no longer give their crown the mad people patiently live in the country of all.

The path of dangerous and barred death. Through superb funerals bleakness is polite misery has charms and love ready to laugh to the innocent obese.

Natural appreciation elements in music. Virginities of mud respectable monkey fireworks fatigue honorable ugliness delicious works where oblivion is repainted. The suffering is there by chance. And we are the ground on which everything is built and we are everywhere where the heaven of others rises. Wherever the refusal to live is useless.

This major poetic collection, inscribed in the end of his relationship with gala, paul eluard dedicates to him as follows: to gala this endless book. It was also at this time that gala (who was openly the mistress of max ernst) met salvador dalí. Gala left the poet for the painter in 1929, the year the collection was published. Paul eluard will say to gala: "Your hair slips into the abyss that justifies our distance.

The collection will finally have only 3 parts: first, second nature as an image, the three poems presented here by eluard à bousquet are from the second part of the collection, second nature. The last two parts defending knowledge 1 & 2 mentioned by eluard in the letter will eventually be grouped into a single collection and titled as such. Queluard evokes at the end of the letter, is a short novel of battle georges.

Published clandestinely for the first time in 1928, under the pseudonym Lord auch, which describes the sexual experiences of two teenagers and their growing perversity. 1 : the poem xxxvii will be titrated i p.

243 the poem xxix will be titrated ii p. 243 244 the poem xxxv will be titrated xx p. Annotations to the pencil of lucian scheler. The item "paul eluard / letter autograph signed enriched with 3 poems / love poetry" has been on sale since Monday, July 12, 2021. It is in the category "collections\letters, old papers\autographs\others". The seller is "laurent-autographs" and is located at/in versailles. This item can be delivered anywhere in the world.