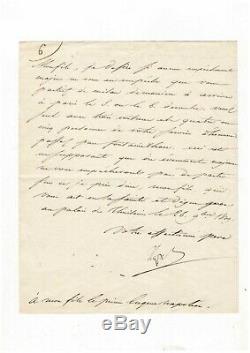 Letter signed \The letter is written by duroc. Important historical letter in which Napoleon convokes eugenes beauharnais to announce his divorce with limpératrice josephine. I wish if no major impediment prevents you that you leave Milan to arrive in Paris on December 5 or 6. Come alone with three cars and four or five people from your honor service.

This is assuming that major events do not prevent you from leaving. With that, I pray God, my son, that he has you in his holy and worthy guard. At the palace of the Tuileries, the 26th of 1809. It is only four days after this letter that Napoleon announces to Josephine his resolution of divorce.

Prince Eugene will arrive in Italy on December 8th, preceded a few days before by his aide-de-camp, the tascher commander of paging. The dissolution of marriage (by mutual consent) takes place on December 14 in Paris, at the palace of the Tuileries, in the presence of cambacérès, prince archichancelier and regnault of saint-jean dangély, secretary state of the imperial family. At this ceremony, Madame, the Queen of Spain, Naples, the Princess Pauline, the Kings of Holland and Westphalia, of Naples, the Viceroy of Italy, were present. The senate will adopt the next day the senatus-consulte which dissolves the marriage. The item \The seller is \This item can be delivered anywhere in the world.