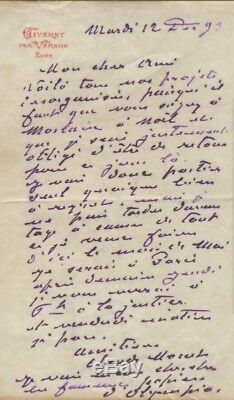 (130 x 215) in 1 page: 27 handwritten lines in purple ink on letterhead "giverny by vernon eure" printed in red, envelope preserved. By this missive, the painter announces to him that he will come to see him at the headquarters of the newspaper to which he collaborates from the beginning, justice, founded in 1880 and directed by georges clemenceau.

The anarchist attacks then make headlines, a bomb having been launched the previous Saturday at the tribune of the Chamber of Deputies by auguste valiant, whose headline of justice the same day that Monet wrote his letter announces that he confessed . Monet also mentions "the famous Olympia papers\Presented at the Universal Exhibition of 1889, it failed to be acquired by an American collector who offered 20,000 francs to acquire it. For fear of seeing her leave France, claude monet, supported by octave mirbeau, launched in July, a large subscription to offer the painting louvre.

The sum was collected February 7, 1890 thanks to contributors such as curd, durand-ruel, huysmans, mirbeau and of course monet; others refused, like zola, fauré or cassat. The painting was first presented to the Luxembourg museum, then, on the final decision of clemenceau, joined the louvre in 1907, where it hangs against the great odalisque of ingres. He is today exposed to the musée d'orsay. "My dear friend, here are all our disorganized projects, since you must be at Christmas, and I will be obliged to be back for that day.

" I will leave alone, although regretfully. But I can not be late because of everything I want to do by May. I will be in Paris the day after tomorrow Thursday. I'll see you at 6 am to justice.

And Friday morning I leave. I will still look for the famous olympia papers. Photos and additional descriptions on request. Bank transfers and checks (France) are also accepted, as well as remote cb.

The prices are fixed and adjusted, the package (neat) is offered. Possible withdrawal at the bookstore (orleans), and by appointment in paris. In accordance with the uses of the international league of the old bookshop.

The ordered items are backed within 14 days. Returns charges are the responsibility of the buyer. _gsrx_vers_625 gs 6.9.7 (625). The item "monet autograph letter signed to gustave geffroy 1893" is on sale since Monday, May 7, 2018. It is in the category "books, comics, magazines \ old books, collectibles".

The seller is "bookstore-walden" and is located in / orléans. This item can be delivered anywhere in the world.