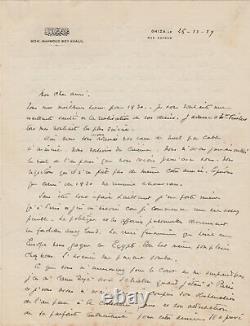 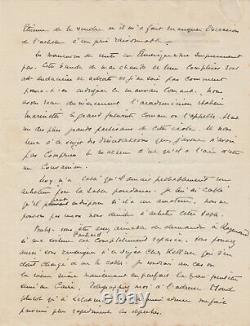 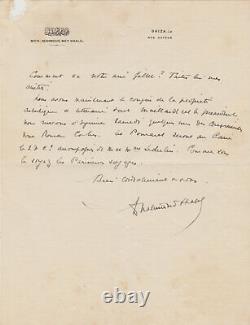 Signed autograph letter to maurice sheet. Signed autograph letter, the caire, December 25, 1929, 3 pages in-4° on paper at his address, to maurice sheet. Very beautiful vow letter filled with details about the political and artistic life of the late mad years. Political affairs "become a rather heavy burden" following the historic crash of the new york stock exchange, two months earlier. The crisis that affects the Europeans is winning Egypt and "the future [it] seems dark. Mahmoud khalil informed him of the missed case relating to the purchase of a corot painting "at a reasonable price" that andré schoeller, the expert and administrator of the small George galleries, insisted on classifying as false before changing his mind the following year. A great collector, mohamed mahmoud khalil is also the founder of the society of friends of the fine arts of the caire and one of the correspondents of the Academy of Fine Arts of Paris after the Second World War. His home of giza and the collections it contains became in 1962 the musée mohamed mahmoud khalil which houses more than 300 exceptional pieces including works of delacroix, curved, degas, monet, renoir, gaughin.. he then added that he recently received filippo tommaso marinetti: "the great futurist as it is called. He is one of the greatest supporters of this school. He kept us on this subject of the essays that I confess have not understood. The bad thing is, he seems to be a convinced man.

He continues on the sale of a powdery table which he is willing to sell and asks for information on the repair of his panhard car which he would like to bring to the caire once ready. Finally, he finished on a future congress and a lunch with the coolus Roman writer. All my best wishes for 1930. I have excellent health and fulfilment of your desires.

I address all my sincere wishes. Yesterday we addressed our Christmas vows to you by cable at midnight.

We got out of the movies. We've never forgotten the Christmas last year that we spent with you.

We regret that this year was not the same. Let us hope that the one of 1930 will bring us together again. Without being quite valiant I am doing better than betting and I need it because I start a rather painful life..politics and personal affairs become a rather heavy burden. The financial crisis in Europe is gaining in Egypt.

She's even beating up at our house. The future seems dark to me. What you're telling me about the corot doesn't surprise me. I already caused it with schoeller when I was betting and I confess to you that I never understood his obstinacy last year to consider it false and his attestation of his perfect authenticity for this year.

He deprived her of selling it and made me miss the opportunity to buy it at a reasonable price. America sales manoeuvres don't surprise me.

This band of merchants and their accomplices are audacious and deceitful, and I do not see how to stem this evil current. We have recently received the Italian academician Marinetti the great futuristic as it is called. Levy told me he'd probably have a buyer for the powdery table. I told him that he [repented: could] dispose of it if he has an amateur. We can't decide yet to buy this table.

Would you like to be kind enough to ask raymond if my panhard car is completely repaired. You can also find out about this at Kellner, who took care of it for me. I'd like in case the car is now in perfect condition to do it maybe come to the caire.

Telegraph me to the soft address rather than lelakmo. The first address sent me the dispatches faster. How's our girl friend? We now have the Congress of Artistic and Literary Property of which Maiillard is the President. We receive lunch on Saturday some of the congressmen including Roman coolus.

The ponsards will be at the caire on 28 c. Accompanied by m and m.

As you can see from the Parisian trips. English and Russian translations available on request.

Shiltonson is a member of the national union of the ancient and modern bookstore / international league of the ancient bookstore. Small lack of paper without damage to text in the upper left corner of the second sheet. Mohamed Mahmoud khalil is an Egyptian lawyer and politician, Francophile and amateur of modern art.

The museum that bears its name in the caire is both its former residence and contains part of its collection. Maurice alexandre albert feuillet is a French artist, cartoonist, illustrator and journalist. More information about mohamed mahmoud khalil.

More information on maurice sheet. This is an authentic letter. Our letters are accompanied by a descriptive sheet including a transcript.

The invoices and cards we issue are instead of a guarantee certificate. France free shipping private carrier on request. Shiltonson Rare Books & Manuscripts. This item is in the category "collections\letters, old papers\autographs\historical persons". The seller is "shiltonson-paris" and is located in this country: fr. This item can be shipped to the following country: whole world.