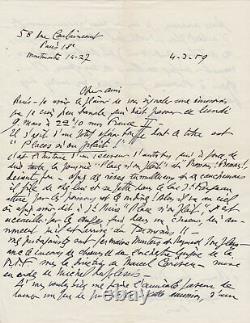 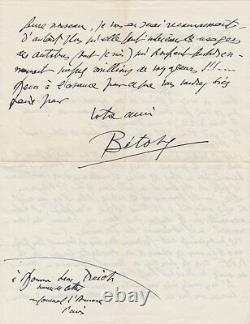 He asks the journalist to promote a fun show with montero and supple raymond on france 2. The year following the writing of this letter, michel-maurice levy will receive the grand prize of French music awarded by the sacem.

58 rue Caulaincourt paris 18e montmartre 14-27. May I have the pleasure to report to you a program that I don't think is commonplace, which is scheduled to pass this Monday, March 9th at 10pm on france ii.

It is a small opera-bouffe whose title is "Places if or please! It's the story of a bus receiver who says all day "seats if or please" and "press!

" gets crazy - after tumultuous dreams and nightmares he runs from home and throws himself into the lake st fargeau attracted by fish and ondines! Then he goes to heaven where after having told st stone "place if or please", he is welcomed by the angels who in a cabbage, announce to him that he has arrived at the terminus! My protagonists are first montero and flexible raymond - with the help of chours and the lyrical orchestra of the r.

Under the direction of marcel cariven - airing of michel duplessis. If you would like to make me the friendly favor of launching a little publicity at this show, I would be grateful, especially since it may interest the bus users (of which I am)... Thank you in advance for what you would like to do well for your friend Betove. To Monsieur Léon treich man of letters to the newspaper the dawn bets.

English and Russian translations available on request. Shiltonson is a member of the national union of the ancient and modern bookstore / international league of the ancient bookstore. Autograph letter signed by L. Michel-maurice levy, dit betove, is a French composer, pianist and conductor. Léon treich, born léon marie joseph eugéne treich, is a French journalist, screenwriter, writer and writer.

He was part of the resistance and fought against the petainist grip on French cinema. More informations about michel-maurice levy. More information on leon treich. This is an authentic letter. Our letters are accompanied by a descriptive sheet including a transcript.

The invoices and cards we issue are instead of a guarantee certificate. France free shipping private carrier on request. Shiltonson Rare Books & Manuscripts.