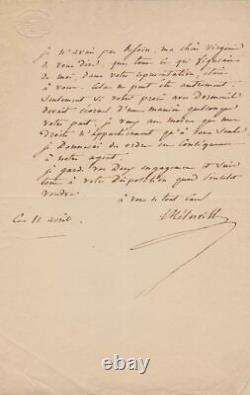 Signed autograph letter to virginie dejazet. Autograph letter signed, bet, 11 April [1844], on paper at his digit, in virginia dejazet. Rare letter about the affair between virginie dejazet and the sleep actor. After thirteen years of unrelenting production, there was understandable weariness among the authors of the dejazet; then one could fear that the shortage of favorable subjects or the poverty of the roles written for her would further increase and compromise the end of her career. This apprehension was for many doubtless in the resistance that the actress met when it came to renewing, for the fourth time, her treaty with the royal palace.

Allowing himself to the numerous successes and abundant recipes that this theatre owed him, déjazet naturally asked for an improvement to the clauses of the commitment that expired on April 7, 1844. The modest improvement consisted in the extension to one semester of the four-month leave granted to him each year; sleepy would only consent to it by reducing to 60 francs the fires he paid 80 or 100 francs for the coins in four or five acts. It was out of proportion compensation, and already he refused to accept it. Vaiement melesville intervened informally and then formally between the parties, both persisted in their claims.

This debate could only lead to a rupture: on 30 April 1844, in fact, dejazet gave, at the royal palace, his last representation, composed of carlo and carlin and Mademoiselle déjazet at the serail. Henry Lecomte, virginie dejazet, according to his papers and correspondence.

I didn't need to tell you, my dear virginia, that everything that appeared from me, in your representation, was yours. It can't be any other way. Only, if your trial with sleep is going to hurt you in any way, at least I want my rights to belong to you alone. I will instruct your agent accordingly.

I keep both your commitments and am at your disposal whenever poncelet wants. It's up to you from every court. Anne-honoré-joseph duveyrier dit melesville is a French dramatic author. Pauline virginie dejazet is a French actress. She gave her name to the theatre dejazet, of which she was the owner from 1859 to 1870.

More information about virginie dejazet. This is an authentic letter. Our letters are accompanied by a descriptive sheet including a transcript. The invoices and cards we issue are instead of a guarantee certificate. France free shipping private carrier on request. Shiltonson letters autographs & historical documents. This item is in the category "collections\letters, old papers\autographs\historical persons". The seller is "shiltonson-paris" and is located in this country: fr. This item can be shipped to the following country: whole world.