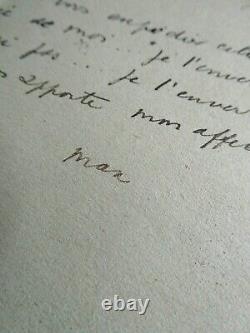 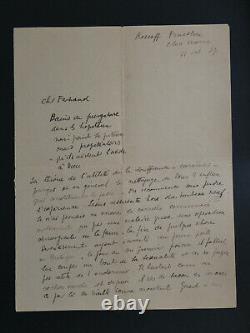 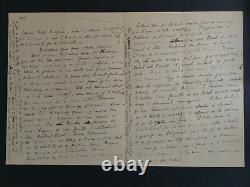 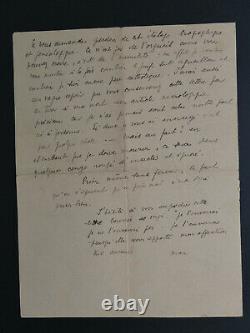 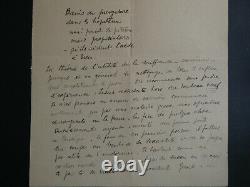 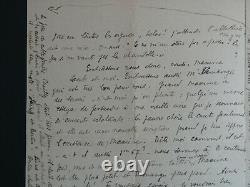 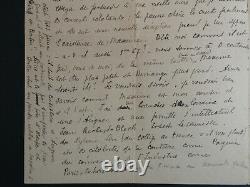 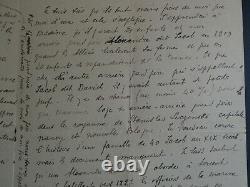 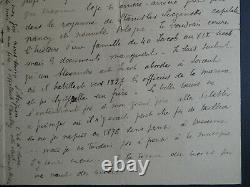 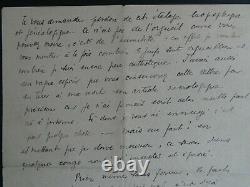 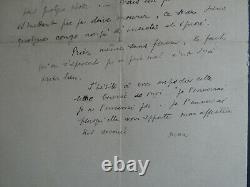 Unpublished signed autograph letter addressed to the poet fernand pouey. 4 pages 17.4 x 22.7 cm. Let them help the aeda to God. Here the theory of the utility of suffering -carems- purges and in general the cleaning of all the influxes that constitute the past.

We start again without losing the experience: jesus resurrected out of the new tomb. I've never seen a quarries started before other than a serious illness, surgery, or hunger. The end of something recently having invented a young poet in Bretagne, on the day of his first poem it was necessary to cut off a piece of his sexuality and it was not considered useful to fall asleep.

He screamed like a scorched pig and since then he has been successful on that day his old maid died. As for you, I've had all the organs, alas. I wait for lalléluia "you are there" said a voice.

And I didn't see it! The game isn't worth it. So let's kiss us, you, maxim, jacob and me. Let's also kiss mr demange which is very good for you. When maxim was successful, I was congratulated: someone even tried to persuade my old mother that I was giving brilliant concerts: the poor dear believed him easily and she had a new disappointment when I taught her the existence of maxim.

Tell me how he is, does he also have 1m67? We are within 6 centimetres, you and I, of the same size (me below). Maxime must be smaller and taller. I'd like to know, I'd like to know how maxim is my cousin and if he is.

I have three branches of lorraine and a davignon and a family of intellectuals, léon richard bloch, ernest la jeunesse, sylvain leví (at the college of france please) and celebrities of sewing as paguin of commerce and industry as betting-cahors or ladies of france to the new galleries. By my father's grandmother we're avignon.

My father's mother's name was chailly, she was a dentellar, the father of this grandma chailly was very pious: he was in the consistory of avignon and never stopped praying. When he went to the firm to stop praying, he repeated two words...?

Bertin was a famous painter of Napoleon i. I'm sure they're less proud of me than I am of them and that's why. I will learn maximally that there were 20 children in my great grandfather's house, Alexander said jacob in 1813 when the allies burned his farm and the 20 children spread over the france.

And that in the other great-grandfather named jacob said david there were so many little Jews. There are chances (at least 40%) for maxime to lodge its great great fathers in the kingdom of stanislas leczinski capital of nancy and new Poland.

I would like to write the story of a family of 40 jacob in the 19th century but three documents are missing. I only know that an alexandre dit jacob approached to the east where he dressed the naval officers around 1827 and where he called a brother. The sisters-in-law didn't get along and my grandfather went to settle down to quimper where there might not have been any tailors and where I was born in 1876 without thinking of maxim... But I soon thought of the music I still think about it... His at least which is worth success.

I beg your pardon for this biographical and genealogical display. It is not pride as you can believe, it is humility: indeed I wanted to show you both how proud the Jews are and how little I am yet Catholic.

I also had a vague hope that you would keep this letter to draw a valuable obituary article when I died because I never wrote this to anyone or anywhere. So if I bothered you, it's for something. By admitting that I have to die, it will be in a few insect-fed congo and ignored. To pray even without fervour, the fact that we know that we pray badly is already to pray well. I hesitate to send you this letter full of me...

I will not send it... I will send it because it brings you my very devoted affection. Traces of folds with a tear in the center if not good condition of conservation. See also my other sales.. loss insurance, theft and degradation included.

Packed with the utmost care. The item "max jacob exceptional autograph letter signs inedite on its Jewish filiation" has been on sale since Wednesday, September 15, 2021. It is in the category "collections\letters, old papers\letters". The seller is "author1917" and is located at/in turn. This item can be delivered anywhere in the world.