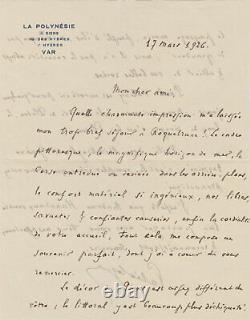 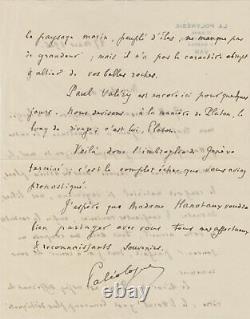 Signed autograph letter to gabriel hanotaux. Signed autograph letter, hyères, 17 March 1926, 2 pages in-4° on polynesia (hyères) header paper, to gabriel hanotaux. Nice friendly letter following a stay with the former Foreign Minister in Roquebrune. Gabriel Hanotaux then resided at the olivette in an avenue that today bears his name. He also announced the presence of paul valery with whom he philosopher: "[.

] Paul valery is still here for a few days. We estimate in the manner of platoon, along the shore; it is it, platoon.

] The former diplomat concluded by noting that "the imbroglio of geneve [is] over; it is the complete failure that you had pronounced. This is the debate on the enlargement of the council of the society of nations, where, at the head of the French aristide briand, paul-boncour and louis loucheur were at the head of the French delegation. This debate follows the signing of the locarno agreements aimed at ensuring collective security in Europe and the borders of Germany. The imbroglio in question is due to the intransigence of Germany in front of the entrance of the pollogne. Indeed, the postponement of the Polish candidacy allowed Germany, once in the council, to veto the entry of Poland or to accept it only in exchange for important concessions.

This dreaded conflict risked deeply dividing the s. "It was necessary to wait until September 10, 1926, to see the Germans officially enter the society of the nations, an entrance admittedly highly noticed, under the applause of the delegates of all the member states and under the enthusiastic look of the international press and the public, massed in the galleries of the hall of the reformation where was held the sixth ordinary general assembly of the sdn.

What a lovely impression I have left my too brief stay in Roquebrune! The picturesque setting, the magnificent sea horizon, the corse interview or guessed in the background, the material comfort so ingenious, our free, learned & confident talks, finally the cordialié of your welcome, all this makes me a perfect memory, which I have to thank you for. The gypsy decor is quite different from yours; the coastline is much more shredded. The marine landscape, populated by islands, does not lack greatness; but it does not have the abrupt & alteric character of your beautiful rocks.

Paul valery is still here for a few days. So this is the end of the genealogical imbroglio; this is the complete failure that you had pronounced. I hope that Madame Hanotaux will share with you all my affectionate & grateful memories. English and Russian translations available on request.

He was a diplomat and historian, a deputy in 1886, minister of foreign affairs in two cabinets in 1894 and from 1896 to 1898. He has published various historical works, the most important of which is the History of the Cardinal of Richeplace. More information about gabriel hanotaux.

This is an authentic letter. Our letters are accompanied by a descriptive sheet including a transcript.

The invoices and cards we issue are instead of a guarantee certificate. France free shipping private carrier on request. Shiltonson Rare Books & Manuscripts. This item is in the category "collections\letters, old papers\autographs\historical persons". The seller is "shiltonson-paris" and is located in this country: fr.