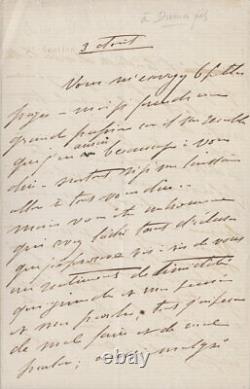 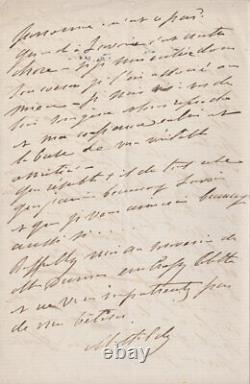 Signed autograph letter to Alexander Dumas. Signed autograph letter, Saint-gratian, August 3 [between 1860 and 1870], 4 pages on paper with letterhead of Saint-gratian, to Alexander dumas son. Very beautiful letter in which she reproaches the author of the lady with camellias for her lightness following a letter sent where the writer's pen appears much more tender than usual. She thus reproaches him for his character ("[.

] You want to be a skeptic, a gentleman who has known everything, tried everything, that everything has washed and disillusioned - hence your morals so absolute, so harsh, so ruthless [.] ) and explains his view of the incident: "[.] Now, a woman who is innocent in her mind makes a simple sentence for you and whose scope she did not suspect, you take it seriously; your ice melts, you find your courtyard forgotten and you trace from your beautiful writing the most kind and flattering words [.] " However, she did not hide her sincere friendship and, in the last paragraphs, let it appear that she would like to lift the ambiguity on their last exchanges. An important lounger, the Princess Mathilde regularly received in her salons - notably in her private hotel rue de courcelles and her castle of Saint-Gratian -, Alexander dumas son.

The latter, close to the princess, had visited him in exile in Brussels after the fall of the second empire. In the archives of the foundation primoli à rome there is a beautiful photograph of a group in Saint-gratian led by mathilde bonaparte and dumas fils (carton n°241 / 18068 / prog).

You send me 6 small pages - I take a large paper because it seems to me that I am. I'll have a lot to tell you - especially if I let myself go and tell you all. But you are a man who has let go of so many locks that I experience vis-à-vis you a feeling of shyness that guides and my thoughts and words.

So much I will avoid doing wrong and speaking wrong; also despite. The tenderness of your letter that I would have taken for cash from any other of my friends I hesitated and sought the motive that suddenly gave your pen such a new expression that I thought it was devoid of. You want to be I believe a skeptic, a gentleman who has known everything, tried everything, that everything has washed and disillusioned - hence your morals so absolute, so harsh, so ruthless - one veils one's face by seeing you pass and one reserves his court. But now, a woman who is innocent in her mind makes you a simple phrase of which she did not suspect the scope, you take it seriously of feelings; your ice melts, you find your courtyard forgotten and you trace from your beautiful writing the most kind and flattering words - she to believe it, to think about it, and to say to herself.

You have to be wary. It is a poet - we must be wary - the doubt that is only about. Self is allowed since he doesn't touch anyone.

As for knowing this is something else - if I entered his court I associated him with mine - I live with him without embarrassment or reproach and my trust in him is the basis of my true friendship. What's the result of everything? A lot to know and that I would love you too if... Remind me to remember m. Dumas kiss colette and don't look forward to my nonsense.

English and Russian translations available on request. Mathilde letizia wilhelmine bonaparte, better known as the Princess Mathilde is a representative of the Bonaparte house. Alexandre Dumas, known as "Alexandre dumas fils", is a French novelist and playwright.

The invoices and cards we issue are instead of a guarantee certificate. France free shipping private carrier on request. Shiltonson Rare Books & Manuscripts. This item is in the category "collections\letters, old papers\autographs\historical persons". The seller is "shiltonson-paris" and is located in this country: fr. This item can be shipped to the following country: whole world.