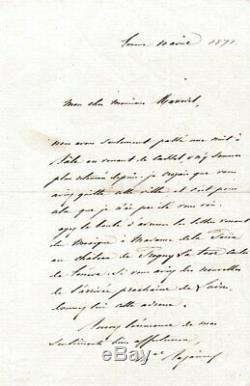 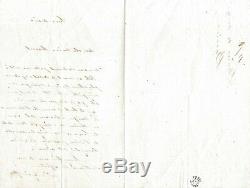 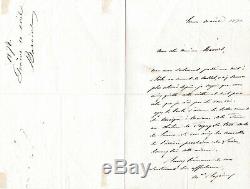 Autograph letter signed Marshal François Achille Bazaine, Geneva in April 1871 (after his betrayal that competed in the defeat of the republican armies), addressed to Mr. My dear sir maxwel, we spent only one night in basel coming from Cassel, and there are more returned since. I thought you had left that city and that's why I did not see you.

Kindly send the letters from mexico to Madame de la Peña in the castle tower Pregny canton of Geneva. If you had news of the arrival of Luders, let him address this ...

François Achille Bazaine was born in 1811, in 1888 in Madrid (last country of exile), he was marshal of France and commander the army of Rhine. Arrested in 1873 in Geneva (Switzerland) following his treason, he was imprisoned at Fort Royal Saint-Daisy island, from where he escaped in 1874 and fled to Spain dimensions 13.5 x 20 cm, 5 cm. Documents for sale in my shop are original, not copies. The document put up for sale in my shop are originals, not copies.