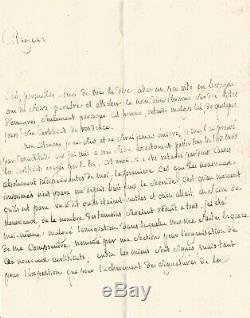 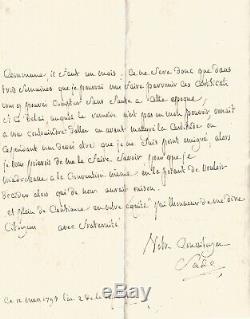 The bookstore autograph centuries has specialized for many years in the sale of autograph letters and manuscripts. Do Natien Alphonse Francois de Sade. Autograph letter signed by an official.

This March 12, 1793, lan 2 of the republic. \Superb letter protesting Marquis against his inclusion on the list of emigres. Citizen, this is let me tell you go a little fast than to appear and display the name of a man on démigrés lists, only because this man, delays despite himself, a few days his residence certificate. No citizen, I am and will never emigrated, I proved to you by lai accuracy that I put to you exactly go every three months the certificates required by law. This shipment will was delayed by two causes absolutely independent of me; this is the first that the new printed Nont that appeared last week, the second, this is quau time they appeared was told they were useless, and quon would make new, where the number of witnesses would be reduced to three.

I have been myself despite lémigration in which you do me the favor of me figure named by my section for the organization of such new certificates; Finally mine are signed, but both the exhibition and for the completion of the signatures of the town, it takes months. So it is that in three weeks I can send you the certificates. You can count them flawlessly at that time; if this period, in which the remedy is not in my power, were to force you to go ahead despite the certainty, however, you need to be that I am not emigrated, then I ask you to let me know, so I madresse to the same convention, the blame of praying then decide which of us would be right. And full of confidence in your fairness, I have the honor to tell me, citizen, fraternity with your fellow Sade.

Following dune voluntary administrative error? The Marquis de Sade was registered December 13, 1792 on the list of emigrants of the Rhône mouth, and his goods in the department were sequestered.

This dinfamie brand continued the long and supposedly emigrated was arrested a year later. Check our manuscripts the centuries autographs gallery specializes in the sale and the expertise of autograph letters and manuscripts of the great personalities of the past centuries.

Buy / payment methods we accept the following payment methods: bank transfers and checks. The prices are in Euros and are net. Shipping All shipments are made with insurance registered mail at flat rate of 10 for France and 20 for the rest of the world. We can also carry out shipments by private carrier to your request. Conditions of Sale that complies with the International League of Antiquarian Booksellers, we accept a guarantee of return within 14 days.

The return costs are borne by the buyer. About ViaMichelin proposed pieces are originals which we guarantee authenticity. Our invoices lieu of proof of authenticity of the pieces sold.