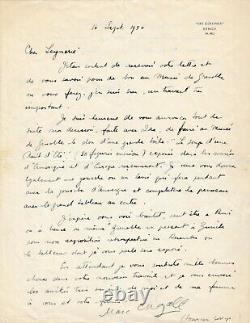 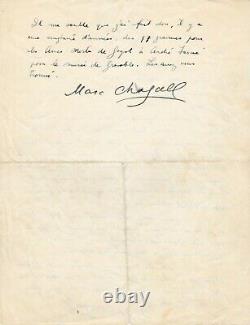 Important letter signed twice with a large signature "marc chagall", addressed to the director of the grenoble museum. In this letter, he announces to him his decision, taken with his daughter ida, "to make at the museum of grenoble the gift of a large canvas: the dream of a summer night (about 50 figures) exhibited in the museums of America and Europe recently. It is in this work, made in 1939, that the artist presents his vision of the famous Shakespeare piece: "[.] This chef-d'œuvre with the tasty naivety and vibrant colour can be read, in the sharp opposition of the two characters, as the symbolization of pure and unclean, flesh and spirit. (guy tosatto, notice of the opening "the dream of a summer night", 2015).

The painting is still on display and is part of the museum's masterpieces. Chagall also wishes to donate "a gouache or a lavis that will go on with the gouache of auvergne"; this is probably one of the illustrations for the fables of the fountain, painters with gouache in the late 1920s during a stay in auvergne. He hopes to meet his correspondent "to grenoble by passing to zurich for [his] retrospective exhibition in December or the painting to which he refers will be exhibited.

The retrospective mentioned is that of the zurich kunsthaus which takes place from December 1950 to January 1951. Before signing his missive a second time, chagall mentions a previous donation of "97 engravings for the dead souls of Gogol", when the museum was run by Andry-farcy. It was at the request of Ambroise Vollard that Chagall delivered in 1924 his rereading of the dead souls in ninety-six strong waters, which would not be published until 1948 by the triad publisher. Jean leymarie, close to the artist, is the author of numerous writings on his work: marc chagall, stained glass for jerusalem (1962); marc chagall and the Bible (1962); marc chagall (1966) and the prefaces of several exhibition catalogues. I was happy to receive your letter and to know you for good at the grenoble museum where you will, I am sure, do a very important job. I am pleased to announce to you immediately my decision, made with ida, to make at the grenoble museum the gift of a large canvas: "the dream of a summer night" (about 50 figures) exhibited in the museums of America and Europe recently. I also want to give you a gouache or a wash that will do while with the auvergne gouache and complete the sign with the large painting in the center. I hope to see you soon, perhaps in bets or vence or even in grenoble by going to zurich for my retrospective exhibition in December or the painting I'm talking about will be exhibited. In the meantime I wish you a thousand good things in your new work and send you the very sincere friendships of me and my wife to you and your wife. It seems to me that I donated, some 20 years ago, 97 engravings for dead souls of gogol to andré stuffed for the grenoble museum. English and Russian translations available on request. Autograph letter signed by Marc Chagall, born Moïche zakharovitch Chagalov, is a French painter and engraver. He is one of the most famous artists installed in France at xx.

His work, without being attached to any school, has characteristics of surrealism and neo-primitiveism. Inspired by Jewish tradition, the life of shtetl and Russian folklore, she elaborates her own symbolism around the artist's intimate life. Chagall tried, besides painting on canvas, engraving, sculpture, poetry, painting on stained glass, enamel, etc. Jean leymarie is a French art historian. Upon liberation, he brought back the treasures he had helped to save to the open and was appointed assistant there.

In 1949, he succeeded Andry-farcy as director of the Grenoble Museum, where he remained until 1955. He then devoted a long period of time to teaching, as a professor of art history at the universities of Lausanne and Geneva, while publishing the first of a long series of books.

This is an authentic letter. Our letters are accompanied by a descriptive sheet including a transcript. The invoices and cards we issue are instead of a guarantee certificate.