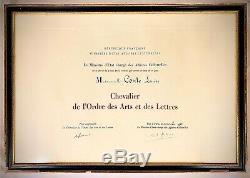 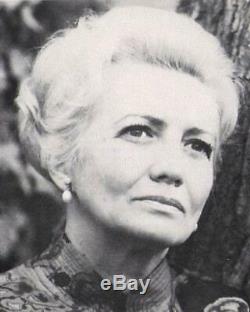 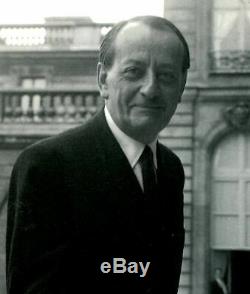 Degree of Knight of the Order of Arts and Letters of the actress louise tale signed by André Malraux. October 12, 1965, when he was Minister of State for Cultural Affairs, André Malraux student louise tale rank.

Knight of the Order of Arts and Letters. Louise tale is a French actress, honorary member of the French comedy, born July 25, 1923 in Enghien-les-Bains (val-d'oise) and died October 19, 1995 (72 years) in château-thierry (aisne ). Undertaken in 1943 in the French comedy-louise tale became, from 1948, member. Then, she was appointed honorary member in 1970, allowing him to continue to perform there. During a tour of representation of the infernal machine of Jean Cocteau for the 1953/1954 season, she crosses paths with the dramatic actor Hubert Rouchon who became his companion. As she continues her acting career he turned to writing and drawing. The couple will be in the small village of Guiseniers acquiring a property louise baptize the \Too isolated from the capital, they finally settled in Enghien-les-Bains at 23/25 Street baths.