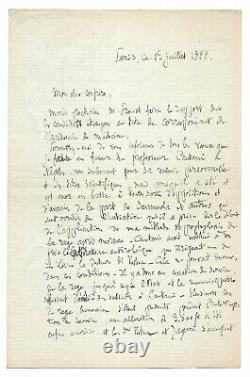 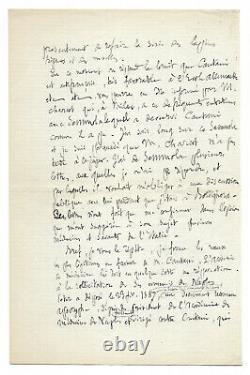 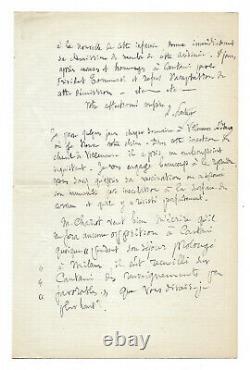 Autograph letter signed \"l. Pastor\" to Professor Charles Bouchard. 3 pages in-8 on bi-feuillet trace of central fold due to lenvoi dorigine. Important letter from a pastor testifying to the high tensions within the Franco-Italian scientific community.

The pioneer of microbiology is a reminder of the means used by his opponents to hinder the work of his colleagues on rabies prophylaxis. [adrien] proust will report on foreign candidates as the medical academy correspondent. (1) let me inform you of all the vux I make in favor of Professor [arnaldo] cantani of naples(2), not only for his personal worth and scientific titles, but because he has been and is still facing all kinds of oppositions and davanies of [mariano] semmola and others that are irritated with the initiative he took from the beginning of the application of my method of prophylaxis of rabies after bite.

(3) cantani had set up at his own expense the rabies laboratory run by one of his students, Dr. This could not last, under these conditions. As a result, rabies was discontinued until the state and the municipality had decided on subsidies to cantani. Several cases of human rabies occurring during the interruption of the service, an allocation of 9,000 fr has finally been granted and the dr vestea and [giuseppe] zagari are currently busy redoing the series of dying rabbits and mussels. At the moment we spread the rumor that cantani and anti French, very favorable to the German school etc etc. You can be informed by Mr. [jean-martin] charcot who, in Milan, had quills interviews with semmola who served cantani as he could. I know a lot about this semmola and I'm convinced that m. I semmola several letters, to which I did not reply, and by which he wanted to interfere in a public discussion with him while I was on theugighera.

These letters did not that confirm me in the plot that Mont suggested about it several doctors and scholars of Litalia. In short, I repeat, I train the most legitimate vux in favor of m. The medical academy owes it in some way a repair.

At the request of his enemies of naples, [michel] peter (5) filed, on 23 Feb [rier] 1887 on the office of the academy of bets, a document recognized as apocryphal, falsely signed by the president of the academy of naples medicine and directed against cantani, who on the news of this infamy immediately resigned as a member of this academy. 8 days after apologies and tributes to cantani by President [salvatore] tommasi and refusal to accept this resignation etc. I spend a few days every week in villeneuve-letang where I find your dog.

In this inaction of the villeneuve kennel he took a disturbing overweight. I'm very much committed to taking it back. You know that after his vaccination we experienced his immunity by inoculation on the surface of the brain and that he resisted it perfectly.

Charcot is willing to admit that he will not object to cantani since \"during his prolonged stay in Milan, he would have gathered uns favourable information on cantani,\" what did I tell you earlier? He was elected a full member of the National Academy of Medicine in 1879 and served as annual secretary from 1883 to 1888.

He inaugurated the monument of pastor in chartres shortly before his death in 1903. His research has led to significant advances in the pathogenesis of infectious diseases. As this letter attests, cantani, a strong supporter of the work of a pastor, created a laboratory of microbiology in naples, recognized as the first Italian institute of therapy against rabies. The scientific dissension between cantani and semmola was already very strong at the time of the cholera epidemic that was rampant in the naples region as early as 1884. 4 cantani and his students were pioneers in Italy in the treatment of certain infectious diseases with germs less pathogenic than those responsible for rabies. In 1887, Pastor had communicated that the development of pathogenic microorganisms could be inhibited by the presence in culture of other non-pathogenic germs. He was elected to the National Academy of Medicine in 1878. Known as one of the main critics of a pastor, he attacked his theories and experiments, notably the rabies vaccine, both in France and abroad.

The long-running controversy between the two men led to the conclusion that it was not always enough for an infectious germ to enter an organism for an infectious disease to occur (healthy carrier theory). 6 pastor refers here to his method (inspired by red experiments) consisting of inoculating by trepanation of the rabies marrow more and more virulent in order to make the dog resistant to the rabies virus.

His discovery of the rabies vaccine in 1885 brought him a worldwide recognition. The academy of science suggested the creation of an institution to treat rabies: the pastor's institute was born in 1888. He is known among other things for the concept of self-intoxication and medical anti-aids.

He joined the academy of medicine in 1873. Bouchard and charcot are dedicated to neuropathology and more specifically to spinal cord sclerosis. Together they discover intracerebral hematomas, the rupture of small millireen aneurysms on the wall of the cerebral arterioles that will later be referred to as \"micro-aneurysms of charcot and bouchard\". Note: This letter, presumably unpublished, does not appear in the general correspondence.

The item \"louis pasteur / unpublished signed autograph letter / rage / trepanation / dogs\" is on sale since Wednesday, October 28, 2020. It is in the category \"collections-letters, old papers-autographs'other\".

The seller is \"laurent-autographes\" and is located in versailles. This item can be delivered anywhere in the world.