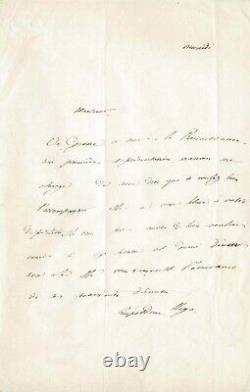 For many years, the autograph library has specialized in the sale of autograph letters and manuscripts. Signed autograph letter to august vacquerie. Slight residual trace of collection stamp. Rare and moving letter from Leopoldine Hugo - one of the last of his life - inviting his brother-in-law, at the request of his mother adele Hugo, to the first theatrical performance of the historical drama of victor Hugo, the burgraves.

"Sir, we're giving the renaissance this evening a first performance. Mom's in charge of telling you that if you'd like to go with her, she has a place at your disposal.

She also asks you to come at six and a half o'clock for dinner. She renews the assurance of her friendship feelings. Leopoldine is the eldest daughter of the great man.

Nicknamed didine, she was worshipped by her father. Married in February 1843 to charles vacquerie, fate struck six months later: on 4 September, in Villequier, the couple sailed for a sailing boat ride. A wind blow overturns the boat; leopoldine, who can't swim, is carried away, just like charles. She had just celebrated her 19th birthday. Hugo, on a trip with juliette drouet.

Don't hear his daughter's death until September 9th. Waiting for the caisselle's diligence in a café, he traveled through the newspaper the century of September 6, which related the event. I'm getting beer and a newspaper.

That's how I learned that half of my life and court was dead. In his diary of juliette drouet speaks poignantly of the event: "On a kind of big place, we see written in big letter: café de l'europe.

Coffee is deserted at this time of day. There is only one young man, at the first table on the right, who reads a newspaper and smokes, facing the counter lady, on the left.

We will place ourselves quite in the background, almost under a small spiral staircase decorated with a red calico ramp. The boy brings a bottle of beer and withdraws.

Under a table, in front of us, there are several newspapers. Toto takes one at random, and I take the charivari. I had barely had time to look at the title that my beloved poor man suddenly leans on me and tells me in a strangled voice, showing me the newspaper he holds in his hand: "This is horrible!

I look up at him: never, as long as I live, will I forget the expression of despair without a name of his noble figure. I had just seen him smiling and happy and, in less than a second, without transition, I found him mad. His poor lips were white; his beautiful eyes looked without seeing. His face and hair were wet with tears. His poor hand was tight against his court, as if to keep him from getting out of his chest.

I'll take the dreadful paper and read it. " Hugo never recovered from this tragic fate and the memory of leopoldine was every day in his court: "Tomorrow at dawn, at the time when the campaign is whitening, I will leave.

See, I know you're waiting for me. I'll go through the forest, I'll go through the mountain. I cannot stay away from you any longer.. consult our manuscripts the gallery autographs of centuries is specialized in the sale and expertise of autograph letters and manuscripts of great personalities of past centuries. Purchase / payment methods we accept the following methods of payment: transfers and bank cheques.

The prices shown are in euros and are net. We can also ship by private carrier at your request. Conditions of sale in accordance with the practice of the international league of the ancient bookstore, we accept a guarantee of return within 14 days. The return costs are borne by the buyer. About all the pieces proposed are originals whose authenticity we guarantee. Our invoices serve as proof of authenticity of the parts sold.

However, at your request, we may establish a certificate of authenticity, in addition. This item is in the category "books, bd, magazines\old books, collection". The seller is "juniennn0" and is located in this country: en. This item can be shipped to the following country: whole world.