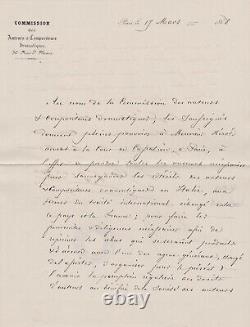 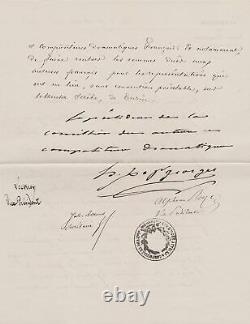 From the hand of jules adenis. On behalf of the Committee of Dramatic Authors & Composers, the undersigned give full powers to Mr. Herold avocado to the Court of Cassation, in Paris, to take all necessary measures to safeguard the interests of dramatic authors & composers in italia, under the terms of the international treaty exchanged between that country and France; to take the necessary legal action & diligens in order to suppress the abuses which would have occurred & agreed with one of the gens-general, responsible for assisting him, to organize for the present & future the regular perception of copyrights for the benefit of the society of French dramatic authors & composers.

Our letters are accompanied by a descriptive sheet including a transcript. The invoices and cards we issue are instead of a guarantee certificate. France free shipping private carrier on request.

Shiltonson letters autographs & historical documents. This item is in the category "collections\letters, old papers\autographs\historical persons". The seller is "shiltonson-paris" and is located in this country: fr. This item can be shipped to the following country: whole world.