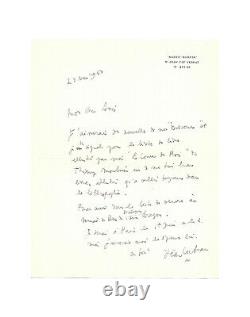 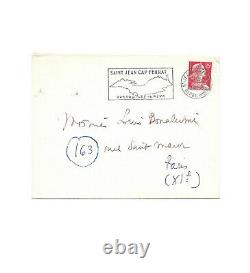 Autograph letter signed Jean cocteau to the French-Italian translator louis bonalumi st jean cap-ferrat, 29 May 1954, 1 p. Beautiful letter from Jean cocteau about his collaboration with louis aragon for the Dresden Museum. I would like news of our speeches and I would like to point out to you for the list of books illustrated by me the race of the kings of thierry maulnier one of my very beautiful illustrated books that we always forget in the bibliography.

Think also in the list of works of the museum of dialogues with aragon. I'll bet on June 1 or June 2. But I'd like to have the tests here. You're a cocteau jeans. The race of kings is a work by thierry maulnier published in 1947 by thierry valmont.

It was illustrated by 8 drawings of cocteau jeans. In the spring of 1955, read. Decides to return to the R. Of the paintings belonging to the Dresden Museum, carried away by the Soviet army at the time of the bombing of the city in February 1945 by the American army. The event motivates the organization of a canvas exhibition, first in Moscow and then in Berlin. Aragon, asked to write the catalogue of the exhibition in the spirit of socialist realism as he redefined it at the xiiith congress of the p. In June 1954, proposed to cocteau to make interviews on the paintings exhibited, from photographs taken in Berlin by roger pic and plates viewed with a magic lantern. Cocteau anticipates here probably an Italian translation of the cited works. The item "jean cocteau / letter autograph signed / aragon / exhibition / dresde / illustrations" has been on sale since Friday, May 7, 2021. It is in the category "collections\letters, old papers\autographs\others". The seller is "laurent-autographs" and is located at/in versailles. This item can be delivered anywhere in the world.