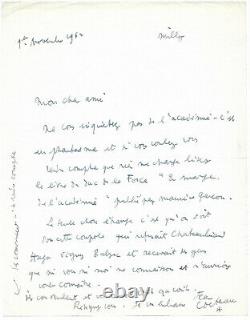 Autograph letter signed \"jean cocteau\" to henry of montherlant milly-la-forêt, November 1, 1962 1 page in-4, small frown upper right edge, trace of central fold due to the original. Beautiful letter from jeans cocteau to henry of montherlant about the reception of the latter at the French academy. November 1, 1962 my dear friend do not worry about the academy is a phantasm and if you want to realize that nothing changes read the book of the Duke of Strength on the margins of the academy published by maurice boy.

The only strange thing is that we were under this dome that refused chateaubriand hugo vigny balzac and received people that neither you nor I know and would like to know. They want you and they'll have you no matter what. (they're starting to realize) resign yourself. Henry de montherlant was elected to the French academy on March 24, 1960, without any other competitor to the siegfried dandré chair.

He had not made any application visits, a formality to which he refused. Agoraphobic, or pretending to be, he was received, by the Duke of Lévis mirepoix on June 20, 1963, only by a reading committee session. Cocteau, after having himself been elected to the academy, confided already in a first letter to montherlant in 1955: they wanted me and they want you believe me, the strange dome is in your line.

To which montherlant replied: jaccept to be of the academy, but I do not accept to run for it. The item \"jean cocteau / autograph letter signed / henry of montherlant / academy\" is on sale since Thursday, November 28, 2019. It is in the category \"collections-letters, old papers-autographs'other\". The seller is \"laurent-autographes\" and is located in versailles.