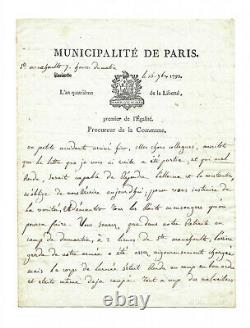 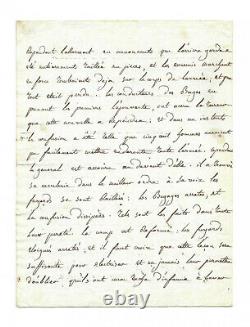 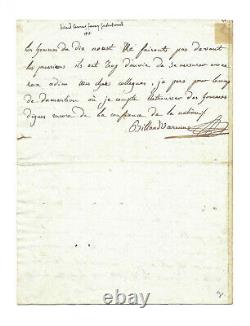 Autograph letter signed "Billaud-varenne" to his colleagues Saint-Menehould, 16 September 1792, 3 p. 1/2 in-4° to head of the municipality of bets traces of folds, marginal repair, small annotation of another hand on the fourth sheet. Historical letter to the tones of fanaticism of billaud-varenne about the march of the republican armies, two days before the crucial battle of valmy, having directly resulted in the abolition of royalty. "A little accident happened yesterday, ladies and gentlemen, as soon as the letter I wrote to you was gone, and bad rendy, would be able to spread the alarm and dismay, obliges me to write to you today; to instruct you of the truth and deny all the false accounts that can be made. You will know that in our retreat to the damartin camp, at 2 hours of st menehoult, the rear guard of our army was loaded quite vigorously but the army corps had gone to the camp in good order and was even already camped.

Suddenly, malicious people spreading the allarm have annoyed. That the rear guard was completely mocked in pieces, and the enemies marching in force were already falling on the body of the army; and that everything was lost. The conductors of the barges by taking the first the fear, increased the terror that this news spread; and in a moment the confusion was such that five hundred men could easily dislodge the whole army.

However, the general is in front of her. He found his cavalry in the best order, that is, the runaways rallied: the luggage stopped, and the confusion dispelled. These are the facts in all their purity.

The camp is reformed: the remote fugitives arrested; and it must be believed that this lesson will be sufficient to electrify and never allow them to forget that they have a spot of infamy to wash in the blood of the enemy. Following all appearances the three armies of mm.

Dumouriez, kelermann and Beurnonville will join tomorrow. Immediately they will walk on shawls, this place is not tenable. There with imposing forces, we will no longer fear the enemy; and if to avoid us, he would take the direction on the side of reims; then he would find you in the head; and we would fall on his back he would not escape one.

So make your arrangements accordingly. Press the work of the betting camp.

Ask loudly for the mass of the line troops that are lost in the departments of the south. As soon as possible, the convoys will march to the meeting points of our troops, and you will retain this calm and energy that has won you in front of the bastille and the castle of the tiles. The men of the ten aoust will not flee before the Prussians they are too eager to compete with them. Farewell my dear colleagues, I am going to the damartin camp where I intend to find men still worthy of the confidence of the nation.

Four days before this letter, the army of brownswick (74,000 men) crossed the slang parades. Billaud-varenne begins by evoking the retreat of shawls and the confusion thrown away by the melvlants who almost put the army in disarray. The soldiers therefore have "a spot of infamy to wash in the blood of the enemy.

" He then evokes the armies of dumurrais, kelermann and beurnonville, the first two of which will be decisive for the battle of valmy two days later. With great distrust towards the enemy, the conventional demands with great cries the rallying of all the republican troops up to those who are "lost in the departments of the south". The battle of valmy was won by the French troops of dumurez and kellerman (44000 men) over the Prussian armies of brownswick. Volunteers from the National Guard participated in the fight alongside professional soldiers from the Royal Army. On the other hand, the Brownswick army retreated and regained its starting positions on 23 October.

The following day, a first meeting of the national convention proclaimed the abolition of royalty, and the executive council formed after August 10 (a fall of the monarchy after the taking of the tiles) was maintained. After 10 August 1792, billaud-varenne was a member of the betting commune. Appointed deputy prosecutor of manual louis stone, he witnessed the massacres of September 1792, during which he seemed to encourage the killers. He went shortly afterwards to shawls with the title of commissioner of the betting commune to supervise the suspect generals. This item is in the category "collections\letters, old papers\autographs\others". The seller is "laurent-autographs" and is located in this country: fr. This item can be shipped to the following country: whole world.