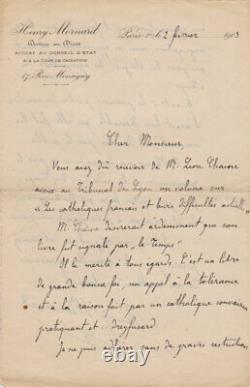 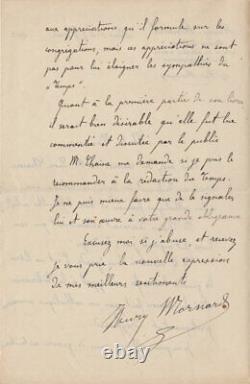 Very interesting letter from the lawyer of lucia and alfred dreyfus to support the recommendation of a book of his friend, awarded him to the civil court of lyon, leon chain, French Catholics and their current difficulties. "he deserves it in all respects. It is a book of great good faith, a call to tolerance and reason, made by a convinced practicing Catholic and..." this book will appear in the bibliographical bulletin of 19 April 1908. His father-in-law's successor in May 1892, Henry Mornard was recommended to defend the case of Zola after his first conviction in the court of betting seats.

He was the lawyer of lucia dreyfus for the cassation of the conviction of 1894 and lawyer of alfred dreyfus for the revision of the judgment of reindeer. In the press: the weather, 19 April 1908. You must have received from Mr Leon chaîne, admitted to the court of Lyon a volume on "French Catholics and their current difficulties". Chaine would ardently wish that his book was marked by "time".

He deserves it in every respect. I cannot adhere without serious restrictions to his appreciation of the congregations; but these appreciations are not to keep the sympathetic ones away from the "time". As for the first part of his book, it would be desirable for it to be read, commented on and discussed by the public. Chaine asks me if I can recommend it to the editor of the time. I can't do better than to report it to him and his opening to your great compulsion.

Excuse me if I abuse, and receive, please, the new expression of my best feelings. English and Russian translations available on request. Third Republic at peace (france). Henry mornard is a French lawyer. Armand schiller is a French journalist.

This is an authentic letter. Our letters are accompanied by a descriptive sheet including a transcript.

The invoices and cards we issue are instead of a guarantee certificate. France free shipping private carrier on request.

Shiltonson letters autographs & historical documents. This item is in the category "collections\letters, old papers\autographs\historical persons". The seller is "shiltonson-paris" and is located in this country: fr.