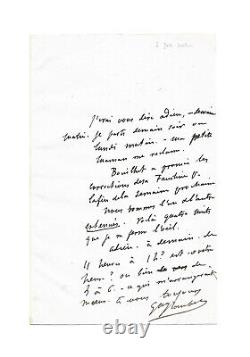 [sic] tomorrow night or Monday morning. My little mom wants me. Bouilhet promised the corrections of his faustine pr. [for] the end of next week. I haven't closed the eye for four nights. That quo would make it better for me. Flaubert, an eternal single person who never wanted to marry, lived his whole life with his mother in their crusset house, until the latter's death in 1872. He was also known to have a very tender affection for him. He would not be played in the theatre of the porte-saint-martin until February 20, 1864, but the manuscript was handed over to marc before March 7 or 14, 1863. A conscientious writer, but lacking originality, his name would be forgotten if Flaubert's correspondence never kept him in memory. He breathed the idea of "madame bovary" to him.