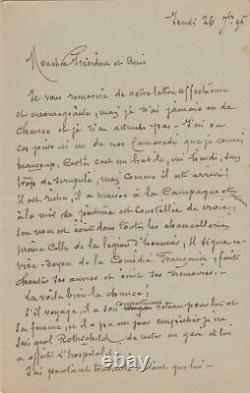 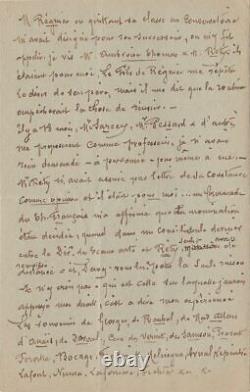 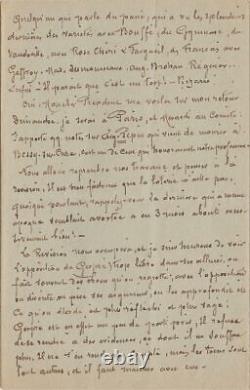 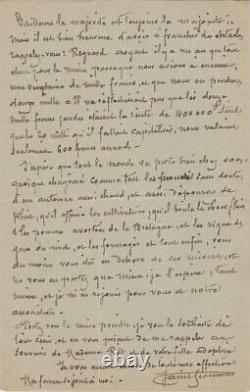 Signed autograph letter to eugen ritt. Signed autograph letter, no place, September 26, 1895, 4 pages, to eugene ritt. Moving letter addressed to the president of the association of dramatic artists in which he evokes his lack of luck compared to the prodigious successes of other actors: "I thank you... But I have never had a chance and I do not expect it - I have seen one of our comrades these days that I know a lot, certainly he is a skilful, bold, without too much scruple, but as he has arrived! He is rich, he has house in the countryside and house in the sea, his chest is constellated with crosses, his name is written in all chanceries even that of the legion d'honneur, he signs ex-vice-dean of French comedy, blackmails his works and writes his memoirs. If he travels, he has his compartment held for him and his wife, and he was able to one day prevent I don't know what rotschild to stay at the station and offered him hospitality. I worked as much as he did," he then mentions the memories of the greatest French actors and actresses: "the memories of georges, rachel, mad allan, anaïs, dorval; those of vernet, samson, provost, ferville, bocage, frederick, melingue, arnal, lepaintre, lafont, numa, laferrière, fechter etc. Someone who talks about the past, who has seen the splendors behind varieties with puffs, the gymnasium, vaudeville, with darling pink & farueil, French with gaffy, mad. Finally - it seems that this is wrong!

He adds, among other things, that he will go to bet with notes on eugene-narcissus seed that has just passed away. Third Republic at peace (france). Gilles de Saint-germain, dit Saint-germain is a French dramatic artist. Jean eugen ritt is an actor and theatre director. More information about the girls of Saint-germain.

More information about eugene ritt. This is an authentic letter.

This letter shall be accompanied by a descriptive sheet including a transcript. The invoices and cards we issue are instead of a guarantee certificate.

France free shipping private carrier on request. Shiltonson letters autographs & historical documents. This item is in the category "collections\letters, old papers\autographs\historical persons". The seller is "shiltonson-paris" and is located in this country: fr. This item can be shipped to the following country: whole world.