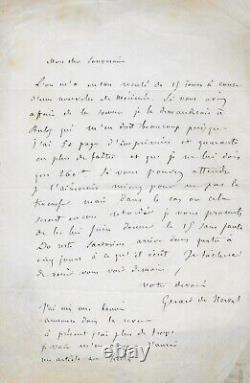 Gérard de derval (1808 - 1855), French poet. Signed autograph letter to the sovereign hippolyte editor. [paris, June-July 1850] ; 1 page in-8°. Letter about the new edition of the scenes of Eastern life first published in 1848 by the publisher sartorius.

The two volumes were later taken over by the sovereign publisher in 1850. That year marked the completion of his travel accounts, from which he would read the story the following year under the title of "travel to the east." Nerval began by complaining about the delay of the publication of the "confidences of nicolas" in the magazine of the two (published in a series in the summer of 1850, they will be taken up in volume in the illuminated in 1852): "I was further reduced by 15 days because of a news of mermaid. If you were dealing with the sum I would ask buloz who owes me a lot since I have 50 pages of prints and forty more in fact and I owe him only 260 f. If you can wait I would love it better not to bother him but in case it would be further delayed I promise you to have them give him the 15 without fail. Moreover sartorius arrives in four to five days to what he writes. I will try to come and see you tomorrow (.) I put a good ad in the magazine now I have more time I'll take care of it.

I'll have an article in the century. This item is in the category "books, bd, magazines\old books, collection". The seller is "cyril2472" and is located in this country: en. This item can be shipped to the following country: whole world.