Georges Méliès Autographed Letter Signed To A. Drioux. The Cinema Of Méliès. 1929 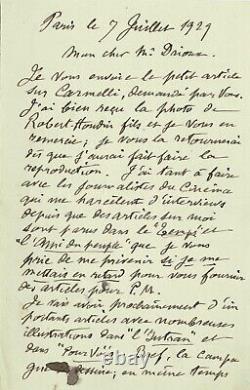 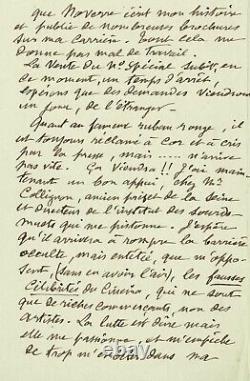 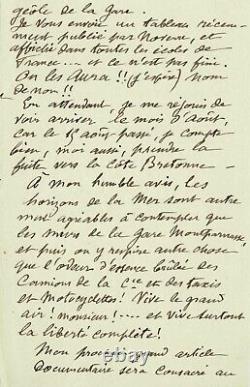 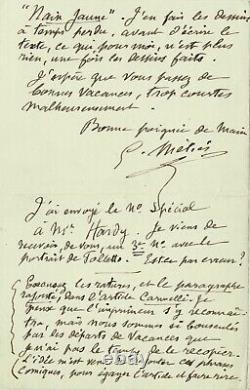 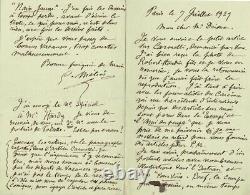 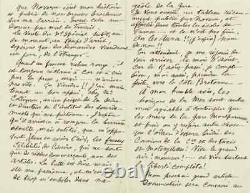 For many years, the autograph library has specialized in the sale of autograph letters and manuscripts. Signed autograph letter to august brilliance. "I have so much to do with film journalists." Moving and rich letter of meliès, finally rehabilitated, requested by drioux for his magazine of prestidigitation.

Méliès recaptures his film career and opponents, evokes Maurice noverre's first biographer, his quest for a legion of honour, and recounts the morose daily life of his toy shop at Montparnasse station. Drioux, I'm sending you the little article on Carmelli, requested by you.

I have received the photo of robert Houdin son and I thank you for it; I will return it to you as soon as I have made the reproduction. I have so much to do with the film journalists who harass me from interviews since the articles about me were published in "time" and "lami of the people", that I ask you to warn me if I was late to provide you with articles for p. [pass nutmeg, the magazine founded and directed by funny].

I will soon have important articles with many illustrations in "lintran[swimming]" and in "for you". In short, the campaign is emerging; at the same time as noverre.

[Mauritius noverre, considered the first film historian] writes my story and publishes numerous pamphlets about my career. The sale of the special number is now being stopped, hopefully the requests will come one day from abroad. As for the famous red ribbon, it is always wrongly and criesly demanded by the press, but does not arrive quickly. I now have a good support, at m. Collignon, former prefect of the seine and director of the Institute of the mute deaf who will plunge me.

I hope that he will succeed in breaking the occult, but stubborn, barrier that I oppose, (without having left), the false celebrities of cinema, who are only rich traders, not artists. The fight is hard, but I'm passionate about it, and it keeps me from bothering me too much in my station jail. I'm sending you a painting recently published by noverre, and posted in all French schools and it's not over. In the meantime, I look forward to seeing the month of August arrive; for on the 15th of August I, too, intend to flee to the Breton coast.

In my humble opinion, the horizons of the sea are otherwise pleasant to contemplate than the walls of the Montparnasse station, and then one breathes into it something other than the smell of gas burned from lorries of the cie and taxis and motorcycles. Long live the open air! And especially live complete freedom! My next major documentary article will be devoted to "yellow dwarf." Jen makes the drawings on time lost, before describing the text, which for me, is nothing anymore, after the drawings made.

I hope you have a good holiday, unfortunately too short. I sent the special number to m. Hardy excuse the rattles, and the paragraph added in the carmelli article.

I think limpresseur sy will recognize, but we're so shaken by vacation departures that I don't have time to copy it. Lide came to add these comic phrases, to brighten the article and make it laugh. Georges méliès ceased all cinematographic activity in 1913. Widow, ruined by the First World War, forgotten by the artistic world, he married in second marriage, jehanne dalcy. Within the Montparnasse station, the company runs a small shop of toys and treats.

Méliès is therefore involved with the small business with Jehanne. During the long hours spent holding the toy shop, seven days a week, meliès bores and suffers from this enclosed universe - as it is evident in this letter; but he continues to draw (even crunching on the walls of the station). It is in this place that Léon Druhot, editor of film-journal, finds him. One morning like all the others, a coffee maker passing by greets meliès with a resounding "Hello, mister meliès! Being on the spot, do not believe his ears, he imagined meliès dead for a long time.

He asks: "Would you be a relative with meliese georges who made pre-war cinema?" Thanks to Druhot, Méliès comes out of oblivion. Filmmaker will then fight hard for the recognition of his role as inventor of the film show and his technical discoveries. And the profession finally recognizes it. Sponsored by louis luminaires, georges méliès finally received the legion of honor - the famous red ribbon mentioned in this letter - on 22 October 1931, during a banquet of 800 guests at the claridge.

(1884.1937), recipient of this letter, was very young a recognized prestidigitator. He founded, in 1916, the journal pass nutmegade, the quarterly bulletin of the prestidigitators.

Apart from regular publications, Drious published a special issue in honour of meliese georges (1929) referred to in this letter. Rencontre melis and visited his Montreuil studio in the 1920s. His description of the first permanent film studio, which had disappeared, was not published until 1929 in the new cinematic art. (June 1925 - April 1930). Magazine of which he was the founder, director and editor.

Considered as the first historian of French cinema, noverre is the defender of forgotten inventors, plagiarized and dispossessed of their works. Specialist of meliès georges, with whom he made a long correspondence (preserved at the French cinematheque), he was the first to describe very precisely the arrangement of his first studios and produced a set of essential texts on the filmmaker. He was also one of the organizers of the "Méliès gala" which took place in the Pleyel Hall on December 16, 1929.

Founding Gala of the film posterity of Melies, where were projected some of the greatest successes of the artist, including the mythical journey into the moon. His little daughter, madeleine melthete-melies, wrote of it, with emotion his memories.

When I saw for the first time, at. In 1929, eight films recovered from my grandfather (was six and a half years old), I was far from thinking that I would run after drawings, letters, photos, costumes and films for more than sixty years.

In 1943, I became secretary to the. Says me, "I have the cinema of the whole world on my shoulders, take care of it.

It doesn't happen a year without finding a film, a drawing, a letter. It is always a dual moment of emotion because, in addition to that of the collector, there is that of the granddaughter who finds the trace of his grandfather the magician who made him tricks of cards, cigarettes and coins while speaking to him. Consult our manuscripts The gallery autographs of centuries is specialized in the sale and expertise of letters autographs and manuscripts of the great personalities of past centuries. Purchase / payment methods we accept the following methods of payment: transfers and bank cheques.

The prices shown are in euros and are net. All our shipments are made in registered mail with insurance at a flat rate of 10 for France and 20 for the rest of the world. We can also ship by private carrier at your request. Conditions of sale in accordance with the practice of the international league of the ancient bookstore, we accept a guarantee of return within 14 days. The return costs are borne by the buyer.

About all the pieces proposed are originals whose authenticity we guarantee. Our invoices serve as proof of authenticity of the parts sold. However, at your request, we may issue a certificate of authenticity, in addition. The item "georges meliès letter autograph signed to a. 1929" has been on sale since Monday, October 4, 2021. It is in the category "books, bd, magazines\old books, collection". The seller is "juniennn0" and is located at/in lyon.