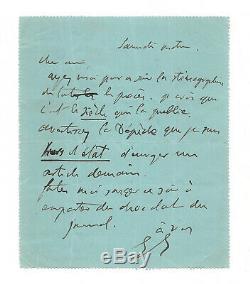 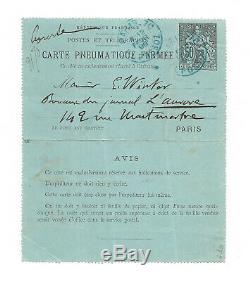 Autograph letter signed initial \C \Clemenceau then editor at the newspaper laurore asks his assistant to bring him the full account of the trial in full Zola Dreyfus affair, a month after the publication of \I believe that this is the century who publishes it. Notify the dispatch that I am out détat to send an article tomorrow. Let me think tonight takeaway newspaper chocolate. Clemenceau was in 1894 one of the opponents of Dreyfus: he wrote in the newspaper justice an article entitled \But the vice president of the senate, scheurer Kestner, with exculpatory evidence, those findings to Clemenceau, who was convinced, and thus change its editorial line. Clemenceau then heart to seek review, pointing out the obvious irregularities of the trial.

Sen following the publication of \writing newspaper laurore etienne winter, clemenceau demands the complete stenographic entire trial, which is actually published in the journal century surcharge. We are then in full trial Zola (letat staff a complaint against him after the publication of \Assize court because clemenceau wasnt a lawyer by training, it was allowed to plead no dress. In a brilliant text he attacked the military motto: res judicata pro veritate habetur. The item \The seller is \This article can be shipped worldwide.