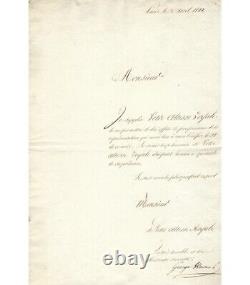 George (marguerite josephine weimer, known as mlle). Signed letter "George weimer", addressed to louis xviii. The famous tragedy addressed to the king the programme of the performance which would take place, for his benefit, on the 28th of April. Your royal Highness was deigning to honour this spectacle of his presence. It was in 1803 that Miss George became the mistress of the first Napoleon Bonaparte consul, after having been that of her lucian brother. Invited to Saint Cloud on June 8, 1803, she claimed in her memoirs that she had not succumbed to Napoleon's advances until 2 days later. She remained her mistress for two years. After their breakup, Miss George declared with superb ". The first consul left me to become emperor. This item is in the category "collections\letters, old papers\autographs\historical persons". The seller is "bibliolibrum" and is located in this country: fr.