François Ponsard Signed Autograph Letter On His Election To The Academy 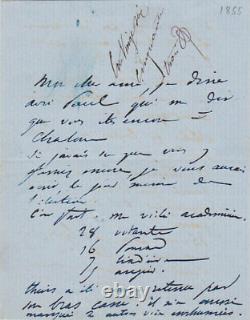 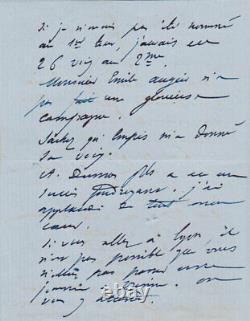 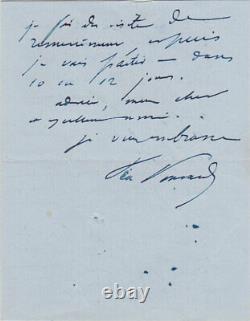 He mentions his missing voices, the success of dumas son as well as the unglorious campaign of émile augier (he will be elected two years later). He ends by inviting his friend to come, his hometown. My dear friend, I'm having dinner with paul telling me that you're still in chalon. If I had known you were still there, I would have written to you on the very day of the election. It's done, I'm an academic.

28 voters 16 ponsard 7 liadières 5 augier. Thiers was held still by his broken arm, I also missed two other colds. If I hadn't been appointed to 1. Round, I would've had 26 votes on 2.

Emile Augier didn't do a glorious campaign. Know that empis gave me his voice.

Dumas son had a staggering success, I applauded from all my court. If you're going to Lyon, it's not possible that you're not going to spend a day coming. We're waiting for you. I'm making thank-you visits, and then I'm going to leave in 10 or 12 days.

Farewell, my dear and best friend. English and Russian translations available on request. A slight central sting without damage to the text. François ponsard is a French poet and dramatist. More information about françois ponsard.

This is an authentic letter. Our letters are accompanied by a descriptive sheet including a transcript. The invoices and cards we issue are instead of a guarantee certificate. France free shipping private carrier on request. Shiltonson Rare Books & Manuscripts.