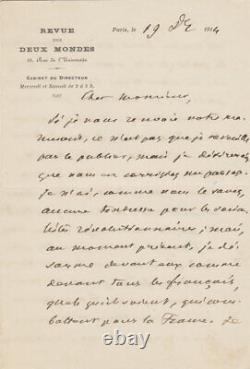 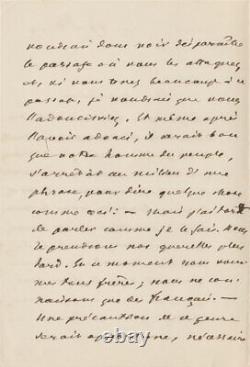 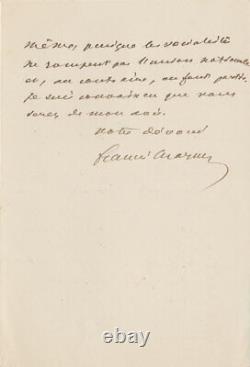 Autograph letter signed, bets, December 19, 1914, 3 pages, on letterhead of the magazine of the two worlds. Beautiful letter about the manuscript of his correspondent. As the Europeans ignited, he hoped that the author would modify a passage that might be a source of dissension: "[.] I have, as you know, no tenderness for revolutionary societies; but, at this moment, I disarm before them as before all French, whatever they may be, who fight for france.

] After the death of brunette ferdinand, francis charmes directed the magazine of the two worlds from 1907 to 1915. A few months earlier, jean jaures was murdered by villain raoul.

In September, the battle of the Aisne began the war of trenches. If I send you your manuscript, it's not that I don't want to publish it, but I would like you to correct a passage of it. I have, as you know, no tenderness for revolutionary societies; but, at this moment, I disarm before them as before all French, whatever they may be, who fight for france. I would therefore like to see the passage where you attack them disappear and, if you are very interested in this passage, I would like you to soften it. And even after having softened it, it would be good for your people's man to stop in the middle of a sentence, to say something like this: - but I'm wrong to speak as I do.

We will resume our quarrels later. At this moment we are all brothers; we know only French. Such a precaution would be appropriate, even necessary, since the socialists did not break national union and, on the contrary, were part of it. I'm sure you'll agree with me. English and Russian translations available on request. Marie françois dit francis charmes is a journalist, diplomat, senior official, French political personality.

He was elected to the French Academy in 1908 and led it. Review of the two worlds. More informations about francis charmes. This is an authentic letter. Our letters are accompanied by a descriptive sheet including a transcript.

The invoices and cards we issue are instead of a guarantee certificate. France free shipping private carrier on request. Shiltonson letters autographs & historical documents. This item is in the category "collections\letters, old papers\autographs\historical persons". The seller is "shiltonson-paris" and is located in this country: fr.