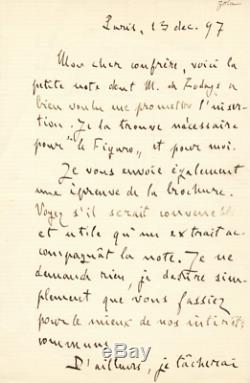 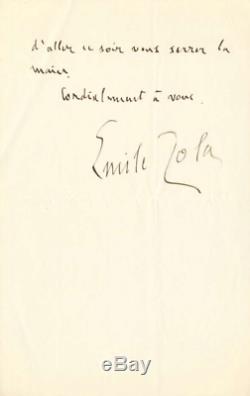 The bookstore autograph centuries has specialized for many years in the sale of autograph letters and manuscripts. Autograph letter signed to a journalist from Figaro. Zola letter significantly accelerating its campaign in support of Alfred Dreyfus and launching the publication of his pamphlet. \The writer is determined: the truth is on. \From rodays kindly to promise linsertion.

I find it necessary for the Figaro, and myself. I also sent a test of the brochure. See sil quun would be suitable and useful extract accompany the note. I ask nothing, I just want you to do to the best of our common interests. Dailleurs, I will try to go tonight you shake hands. End 1897, Zola, revolted by the injustice of the nationalist press, decides to write several articles in the Figaro for the movement Dreyfus.

The first, entitled \Scheurer-Kestner, \In December, Zola continues his fight in another way: the distribution of brochures, making either appeal to readers of a single newspaper but lentière French population. The first of these brochures (discussed here) is published s. E December 14, 1897, at Fasquelle, and titled \On 13 January 1898, Zola still give a new dimension to the Dreyfus affair. Outraged by the acquittal of esterhazy occurred. The author decided to strike a blow and published on the front page of an article on laurore six columns on a shaped open letter to President Félix Faure \Check our gallery autograph manuscripts of centuries specializes in the sale and the expertise of autograph letters and manuscripts of the great personalities of the past centuries.

Buy / payment methods we accept the following payment methods: bank transfers and checks. All prices are in Euros and are net. Shipping All shipments are made by registered mail with insurance at fixed price of 10 for France and 20 for the rest of the world. We can also carry out shipments by private carrier to your request.

Conditions of Sale that complies with the International League of Antiquarian Booksellers, we accept a guarantee of return within 14 days. The return costs are borne by the buyer. About ViaMichelin proposed pieces are originals which we guarantee authenticity. Our invoices as proof of authenticity hold parts sold.