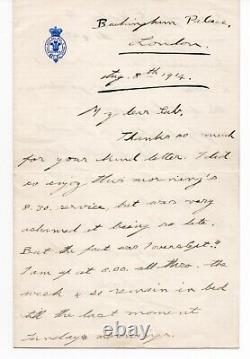 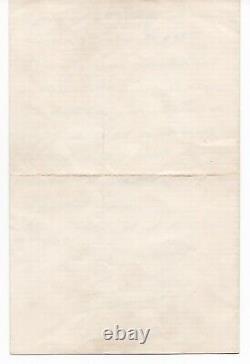 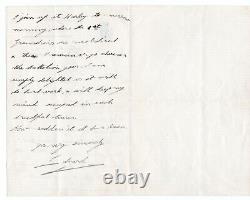 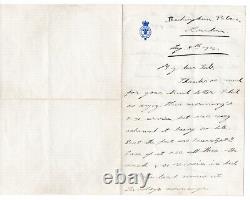 King of the United Kingdom and Emperor of the Indes. Signed autograph letter, London (buckingham palace) August 8, 1914, 2 pages in-8.

Thanks so much for your kind letter. I did so enjoy this morning's 8.30. Service, but was very ashamed at being so late. But the fact was i overslept!!

the week & so stay in bed till the last moment on Sunday. I join up at warly to-morrow morning where the 1st grenadiers are mobilized & there i remain or go when the battalion goes. How sudden it all has been.

My dear sab, I enjoyed the 8:30 service this morning, but I'm really ashamed to have arrived so late. But the fact is that I slept too long!! I get up at 6:00 all week and that's why I stay in bed until the last moment on Sunday mornings.

I'm going to warly tomorrow morning where the first grenadiers is mobilized & I'm staying where I go wherever the battalion goes. I'm just delighted because it's going to be hard work and I'll keep my mind busy in such terrible times. As it all was suddenly.

This letter from the young Edward, then prince of galls, evokes in its last part the beginning of the First World War. Indeed, a few days before the writing of this letter (on 4 August precisely), the United Kingdom declared war on Germany after the Kaiser's violation of Belgian neutrality. The young prince will participate in the First World War in the British Armed Forces and make several trips on behalf of his father, King George v. Edward ascends the throne on the death of his father in January 1936 under the name of Edward viii. A few months after the beginning of his reign, he caused a constitutional crisis by asking for a marriage to the American worldly wallis simpson, who had divorced his first husband and was in the process of divorce from the second.

He abdicated on December 10, 1936. He received the title of duke of windsor and married wallis simpson in france on 3 June 1937, after the latter's second divorce had been formalized. Careful packaging, recommended shipping with ar.

This item is in the category "collections\letters, old papers\autographs\historical persons". The seller is "galerie_jbm" and is located in this country: en. This item can be shipped to the following country: france.