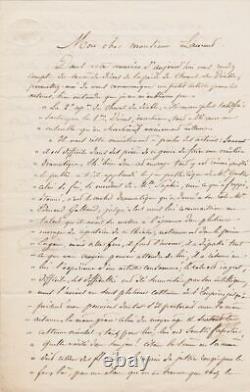 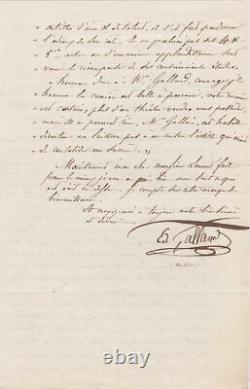 Signed autograph letter, without place, [February 1846], on yvonnet paper. Following the second performance of the devil's horse (a fantastic drama in 5 acts and 14 paintings of Saint Hilaire's amicable, according to the skin of pain of balzac, represented for the first time in the theatre of the circus-Olympic on February 3, 1846), he transmitted to his correspondent an article containing an exceptional praise of the play but especially of edmond galland. In your today's issue you can see the success of decorating the piece of the devil's horse, allow me to share with you a small article for the actors, of course I will not forget. Of the devil's horse, was even more satisfying than the 1. Decors, machines, everything was with a set we'd be looking for in vain elsewhere. Now we have to talk about the actors: often it is difficult in pieces of this kind to make a dramatic creation, eh! Well in this book everything is gathered; so the audience applauded the pathetic game of mr gautier that so fine, so biting with mlle sophie, but what struck, astonished, is the dramatic character that gave to his role mr edmond galland, until then we recognized to him a talent that he had to put to the test in several works of the repertoire of this theatre, especially in the prince eugene, but this time, we must confess, he surpassed everything we thought we could expect from him, he summarized in him the operation of a consummated artist; the role is ungrateful, difficult, his difficulties were overcome by his intelligence, we had seen him in several costumes of the empire so far we could doubt whether he would wear with the same ease, the same grace that of the Middle Age & especially the oriental costume, all of them, for him, seemed familiar, what truth in his play! Let us mention the scene where the mother must remove from the flames the hand of justice reddened by fire, there, by an impulse that can only be found among the artists of soul & talent, he made himself forgive the odious of his role. I will not talk about the 4th acts or unanimous applause came to reward him for his studies. Honor then to mr Galland, courage I man the career is beautiful to travel, your future is certain, more than one theatre will want to possess you, but they will not be able, Mr Welsh, this skillful director will not leave to another artist who has just consolidated his success.

Now my dear gentleman laurent made for the best I beg you, well with all that is written above. I'm counting on that benevolence mark.

And believe me always your sincere and devoted good. Edmond joseph galland is a French actor.

This is an authentic letter. This letter shall be accompanied by a descriptive sheet including a transcript. The invoices and cards we issue are instead of a guarantee certificate. France free shipping private carrier on request. Shiltonson letters autographs & historical documents. This item is in the category "collections\letters, old papers\autographs\historical persons". The seller is "shiltonson-paris" and is located in this country: fr.