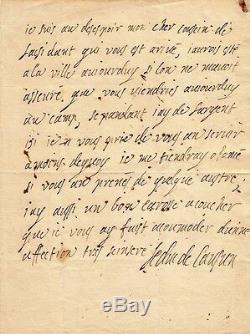 Autograph letter signed to his cousin, the Duke of Valence. Address autograph and wax seal the crowned figure. \Jaurais been to town today if no lon mavait assured that you would come to the camp today, however i money here. Please using it less than what I will offend me if you take any other. I also have a good coach Bedrooms I brought you accommodate dune very sincere affection.

The accident in question occurred in this letter June 9, 1692 at the headquarters before the castle of Namur, city sétait visited Louis XIV two days earlier. In his diary the Marquis de dangeau (1638.1720), famous diarist of Versailles court says the accident occurred during the siege of Namur, \The Duke of Valence, pulling his gun barrel, this gun was blindfolded, shot him and broke the arm to the place that surgeons call forearm. Lauzun, meanwhile, was named Duke the 1. May 1692 by Louis XIV. Similarly, the Marquis de dangeau explains in his diary: \Lauzun quickly became the favorite of Louis XIV, who noticed in the soissons Countess for his free spirit and his insolence.

The king appointed him successively governor of berry, brigadier general and colonel of dragoons. The king promised lauzun load large artillery master of France, but lauzun had the awkwardness to boast of that promise. According to the memoirs of the Duke st simon lauzun took inconceivable audacity to crawl under the bed of Madame de montespan and the king to learn the causes of this turnaround.

Madame de Lauzun includes montespan betrayed him and at their next meeting, trafficking of \Follows a terrible scene, where lauzun breaks his sword before the king who throws himself his cane out the window not to hit a gentleman. This episode is worth lauzun to stay a few days in the Bastille. Back in court, he found the favor of the king who appointed him captain of the company of the king's body guards. Seducer inveterate lauzun accumulates female conquests. In 1670, miss for montpensier (big miss, cousin of the king) the marriage.

Louis XIV's consent before changing his mind three days later. He died at age 90 in 1723, childless. The item \The seller is \This article can be shipped worldwide.