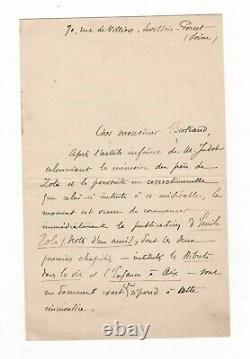 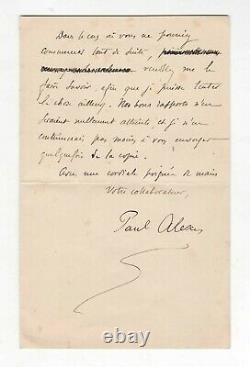 Novelist, playwright and French art critic. Middle of Emile Zola, he of the \Dreyfus affair in full, very interesting letter after the attacks was the victim Zola in the small newspaper.

\After The article infamous m. Judet slandering the father's memory Zola and Correctional chase that it instituted in this miserable, it is time to immediately begin the publication of Emile Zola (notes of a friend); whose first two chapters - titled the early life and childhood in Aix - are an exact document that meets this filth.

If you could start right away, please let me know, so I can try the thing elsewhere. Our good nen reports would not achieved and if I nen would continue nonetheless to send you sometimes copying. For having published his open letter \He had sexiler in London in July 1898. In addition, the director of the Ernest Judet small newspaper published on 23 and 25 May 1898 two defamatory articles against the father of Zola including an editorial \This would explain for Judet of Emile Zola lanimosité against army.

Lécrivain instituted a libel trial the journalist, who was sentenced on 3 August. The item \The seller is \This article can be shipped worldwide.