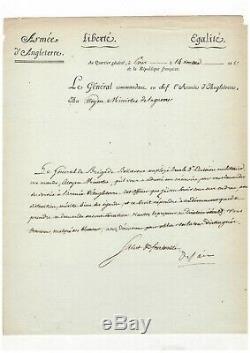 \The general bellavène brigade employs in the 3rd Military Division tells me that, citizen minister, that he sent you a memorandum to ask service dangleterre army. This officer that I saw under me serve with distinction deserves many ways, and it would meet its dedication to take his request into consideration. Please provide the Executive Management Board. We will find, despite his injuries, second, hand enough to use his distinguished talents. In 1796, at the Battle rastatt it estatteint by a ball which carries a leg.

In 1803, Napoleon entrust him the organization, command and direction of the school of Saint-Cyr. He was appointed Baron empire in 1813. Confirmed in his rank of major general by the public hello Committee in. Desaix takes the largest share in the victories of the campaign of year IV and participates among others in.