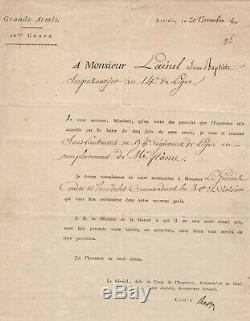 Comte, general dempire and French politician. Signed letter dantzig, November 20, 1813, to Sergeant Jean-Baptist lainel, 1 page grand in-4 header of the great army. Letter written 9 days before his capitulation to dantzig. \I give notice of your appointment to Mr.

Earl dheudelet general commanding the 30th Division who will recognize you in your new grade rep. \Following the retirement of Russia. Sends rep to take command of dantzig, where he must sustain for nearly a year one of the most memorable seats we offer the annals of war. January 12, 1813, he retreats to dantzig and supports a hard seat because only surrendered 29 November 1813.

Lempereur reward the rep dedication by naming him commander of 10. Corps of the Grand Army 12 March following, and. Grand Cross of the Order of the meeting. On April 3 of that year. The item \The seller is \This article can be shipped worldwide.